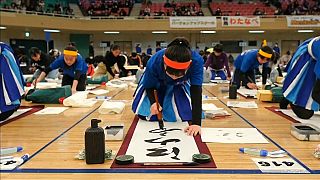 Competitors, some of whom were assigned characters depending on their age and level, were required to finish writing on two pieces of paper within the allotted 24 minutes.

Calligraphy is a widely practised and revered art in many parts of Asia. The act of tracing characters is believed to sharpen the mind and improve concentration.