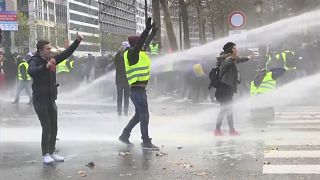 Yellow-vested protests in Brussels were faced with water cannons and pepper spray yesterday as they called for the resignation of Belgian Prime Minister Charles Michel.

The movement in Belgium was sparked by the 'gilet juanes' protests seen across France over the last few weeks.

Police tried to deter demonstrators as they made their way to the European Parliament and other government buildings in Brussels.