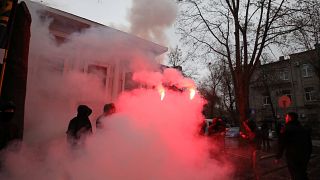 Dozens of Ukrainian nationalists gathered outside the Russian consulate in Kharkiv on Monday to protest Russia's aggression at Ukrainian vessels in the Black Sea.

Masked members of right-wing National Corps organisation hurled flares and eggs at the consulate, which was guarded by police and national guardsmen.

A tree inside the consulate courtyard caught fire, which caused clouds of smoke to billow over the building.

Russia seized three Ukrainian naval ships off the coast of Russia-annexed Crimea on Sunday, a move that led to a new crisis between the two countries.