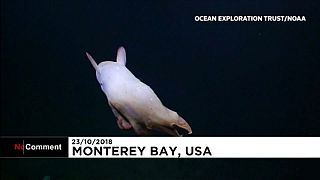 A rare 'Dumbo' octopus was spotted by scientists during a deep-sea research dive done by their unmanned robotic submersible off the coast of California.

Scientists from the non-profit Ocean Exploration Trust were exploring a region near an underwater volcano when the octopod measuring approximately 60 centimetres (23 inches) drifted past the camera of their research vessel E/V Nautilus.

The sea creature is so named because its flapping fins on the side of its head that resemble the famous Disney character.

Also called an umbrella octopus, it lives on the ocean floor at depths of 9,000-13,000 feet (2.7-4 km), according to the Tree of Life Project, an online website researching biodiversity.