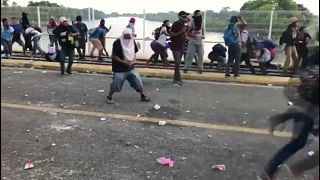 A new group of migrants bound for the United States clashed with Mexican authorities at the country's border with Guatemala on Sunday.

According to reports, the group broke through a gate at Tecun Uman.

Local first responders said that security forces used rubber bullets against the migrants and that one person, Honduran Henry Adalid, 26, was killed.

Six police officers were injured, according to officials.

Mexico's Interior Minister Alfonso Navarrete told reporters on Sunday evening that federal police did not have any weapons, even to fire plastic bullets.

He said that some of the migrants had guns while others had Molotov cocktails, and this information had been passed on to other Central American governments.

Guatemala's government said in a statement that it regrets that the migrants didn't take the opportunity of dialogue and instead threw stones and glass bottles at police.

Trump has threatened to shut down the border with Mexico and last week said he would send troops if the migrant caravan is not stopped.