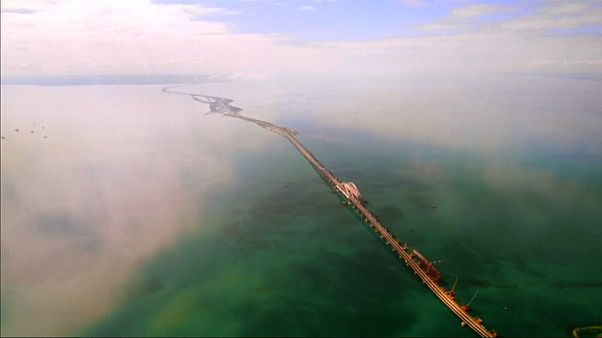 The bridge across the Kerch Strait, which will connect the Crimean Peninsula and Krasnodar Region is officially opened

Russian President Vladimir Putin took the seat at the wheel in the cabin of a Kamaz truck to lead a convoy of 35 vehicles (dump trucks, cranes, cement trucks, tanker trucks and other equipment) along the nineteen-kilometer bridge towards Crimea’s seaside city of Kerch.

Construction of the bridge has been carried out since February 2016 and will be opened for cars on May 16 more than half a year ahead of schedule. The bridge capacity is 40,000 cars and 47 pairs of trains per day, 14 million passengers and 13 million tons of cargo per year.

Russia annexed Crimea from Ukraine in 2014 and has since been trying to integrate the peninsula more closely.