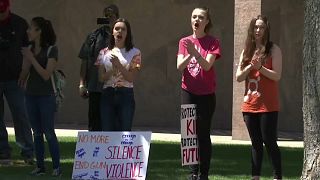 Students across the country streamed out of their schools Friday in the latest round of gun-control activism following the February shooting at a high school in Parkland, Florida.

The protests were chosen to line up with the 19th anniversary of the Columbine High School shooting, which left 13 people dead in Littleton, Colorado. At 10 a.m. in each time zone, students at dozens of schools left class to take moments of silence honoring the victims at Columbine and other shootings.

From there, some students headed to rallies at their statehouses. Others stayed at school to discuss gun violence. Some are holding voting registration drives.

In Phoenix, several hundred students descended on the state capitol to protest for stricter gun control laws and help register people to vote.