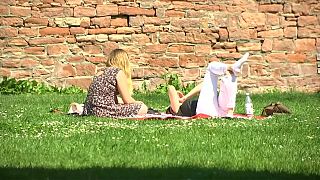 Germans make the most of unseasonally warm weather

April showers were nowhere to be seen on Wednesday with ice-cream the snack of choice across Germany as temperatures reached 28 degrees in some parts of the country.

Sun-seekers were out making the most of the unseasonally warm weather with the German meteorological service (DWD) saying it is among the warmest Aprils in ten years.

But the onset of early summer was not for everyone, least of all for hay fever sufferers, who are being plagued by early blossoming.

According to the DWD temperatures reaching highs of between 25 and 30 degrees are expected to last until Friday.