Thousands of people have been killed in Democratic Republic of the Congo’s (DRC) Kasai region since 2016, according to UN estimates.

Conflict has led to more than a million internally displaced people at the peak of the crisis, according to OCHA figures. This helped make DRC Africa’s first country in terms of displacement: four million fled their homes.

Over three million people in Greater Kasaï are estimated to be severely food insecure.

Lulua bridge, north of the region’s main town Kananga, is the only way out for people fleeing violence from northern areas.

Central Kasaï is one of the provinces hit by the conflict between Kamuina Nsapu militia and state forces. It’s also the main area where returns are underway, being now among the most secure. 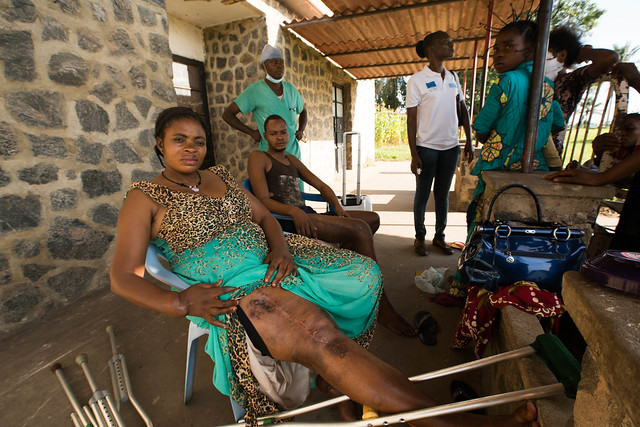 Kananga and its surrounding villages have turned into a haven for returnees, where people rebuild their lives and recover from the scars of the conflict.

#AidZone has just come back from #DRC, to talk about the underreported #Kasaï conflict. 1.4M were displaced, bringing the total number of #IDPs in#DR Congo to nearly 4M, the highest in #africa. Thousands have been killed. Over 80 mass graves discovered so far. pic.twitter.com/oXZ4t2gOKI

“I was at school and I heard firing,” Marie Sankayi, a victim of the conflict, told Euronews.

“I ran away but I was hit by stray bullets on the way home.
I didn’t see who shot, but I felt some kind of pain along my arm and then I saw some blood.
That day, two schoolmates were killed right beside me. The soldiers recovered their bodies. When I saw what happened, I ran, I couldn’t carry their bodies.”

A few months later, everybody left the village. Now she is back and every day she follows the same path where she was wounded on her way to school.

“I thought I would have never be able to use my arm again,” added Marie.

Her arm had two gunshot wounds. A third bullet lodged in the bone. She has partially recovered the mobility thanks to hours of physiotherapy backed by the NGO Handicap International, financed by the EU Humanitarian Aid office.

“The elbow is still having problems.” said physiotherapist Esther Lufuluabo. “There is a start of ankylose. Now Marie can flex and extend her wrist, but she will never recover completely.”

Handicap International has trained physiotherapists in the areas two hospitals to better treat patients with wounds from the conflict.

Another victim of the conflict, Feli Kanyinda, lost one of his legs.

“I was on a train fleeing the militia. I fell off and the train sliced through my leg,” he told Euronews.

Eighty per cent of the cases treated with physiotherapy at the hospitals are linked to the conflict. The facilities in both hospitals were previously insufficient to treat the patients.

Handicap International’s rehabilitation manager Veerle Van Hoestenberghe said: “We have enhanced the physiotherapy room, we have equipped it with the tools we needed to take care of the most severe cases.”

“On the first day we started with five repetitions, then ten and up to 30.” said Feli. “Today I can walk by myself I can even walk one kilometre by myself.”

The EU Humanitarian Aid Office has financed operations through its implementing partners. It focuses on rapid response to population movements, protection and life-saving assistance.

“Everything has been destroyed, if not all the infrastructure, at least a big part of it.” Amparo Laiseca from EU Humanitarian Aid told Euronews. “(Returnees) have no means of subsistence because they couldn’t sow for at least two farming seasons, if not three. They end up with with nothing.”

“Because at the beginning we thought this was just another crisis in DRC,” said Laiseca. “Unfortunately crisis is a daily reality for this country. It took time to understand the scale of this crisis and its violence.”

The UN has appealed for 1.7 billion dollars for Democratic Republic of the Congo in 2018 .. its largest appeal after Syria and Yemen, and more than double the amount it requested last year.