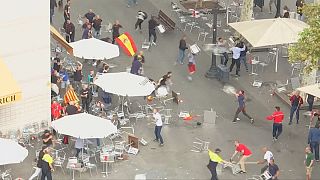 A group of anti-independence demonstrators in the Catalonian capital Barcelona clashed with police on Wednesday, Spain’s national day.

The demonstrators waved an older version of the Spanish flag, defaced Catalan flags and threw chairs on the sidelines of a larger, peaceful demonstration.

It passed off peacefully and with a festive atmosphere under the slogan “Catalonia yes, Spain too.”

The push for independence in Catalonia has plunged Spain into its worst political crisis since an attempted military coup in 1981.