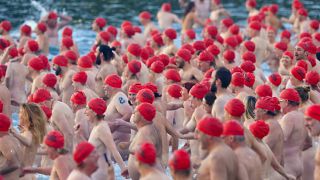 Hundreds of swimmers have stripped down to their birthday suits to bathe in the chilly waters of Tasmania state in Australia, plunging naked into Hobart’s Derwent river to mark the winter solstice.

Although much of Europe remains in the clutches of a heatwave, down under Australians are preparing for the long winter.

The nude swim is part of the annual Dark Mofo festival and drew about 1020 swimmers – a huge turnout that caught organisers off guard, leaving many skinny dippers without supplied towels.