The State Opening of Parliament is an annual event in the United Kingdom. Its origins can be traced back to the 16th century.

The ceremony has existed in its current form since 1852, when the Palace of Westminster, comprising the upper and lower houses of parliament, was rebuilt after a major fire.

The centre-piece of the ceremony is the Queen’s speech, which is delivered to members of the House of Commons and the House of Lords.

In the speech, the monarch sets out the government’s legislative priorities for the parliamentary year.

The ceremony brings together the monarchy, the elected MPs of the House of Commons, the (mostly) appointed members of the Lords (the upper house of parliament) as well as senior members of the judiciary and diplomatic service.

Certain traditions are observed that nowadays serve a purely ceremonial rather than practical purpose.

For example, on the day of the event, the cellars of the Palace of Westminster are searched by the Yeomen of the Guard – the monarch’s own bodyguards and the oldest existing British military unit.

This search was originally made in 1605 after a failed attempt led by English Catholics, including Guy Fawkes, to assassinate the protestant monarch James I by blowing up the Houses of Parliament. The cellars have been searched by the Yeomen ever since.

Another outdated ritual that is still maintained is the ‘delivering of the hostage’. The monarch keeps the Vice-Chamberlain of the Queen’s Household, a government representative, under guard in Buckingham Palace while she is attending the ceremony at the Houses of Parliament.

This ‘hostage’ is to guarantee the safe return of the monarch from parliament. This practice was brought in by Charles I, whose turbulent relationship with parliament ended with his beheading in 1649.

The Monarch’s route to Parliament

The Monarch is taken in a horse-drawn carriage, accompanied by the Royal consort (today the Queen’s husband, the Duke of Edinburgh) from Buckingham Palace to the Sovereign’s Entrance at Westminster. 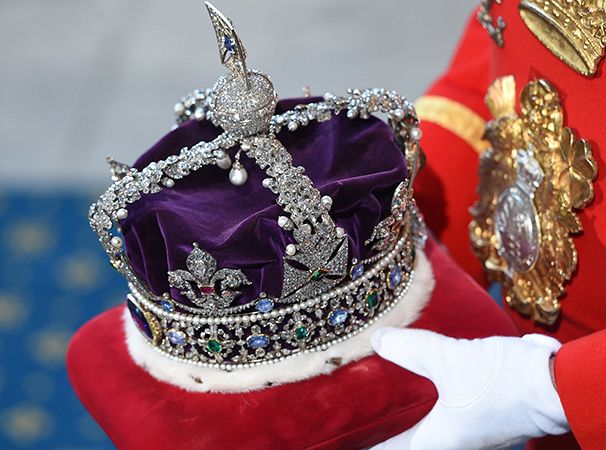 The Imperial State Crown worn by the Monarch during the ceremony travels in its own carriage ahead of the procession.

Once at Westminster, the Monarch gets dressed in the Robing Chamber, donning the parliamentary robe and the Imperial crown. The Queen then proceeds to the House of Lords where the speech will take place.

Summoning the House of Commons

When the monarch is ready, the Gentleman Usher of the Black Rod (or just ‘Black Rod’ for short) goes to the lower house, the House of Commons, to summon the MPs into the House of Lords. 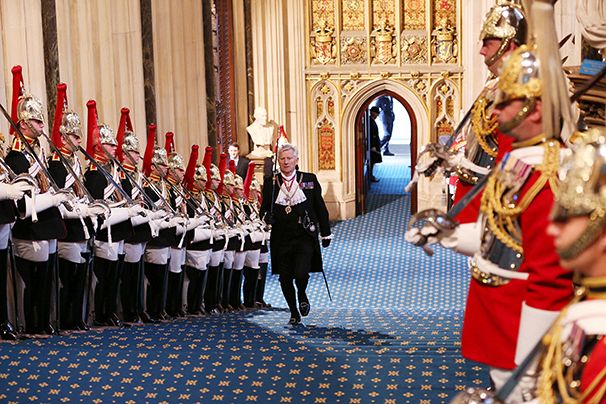 The Gentleman Usher of the Back Rod, a.k.a. ‘Black Rod’ is a role first created in 1350

As he approaches the Commons, the door is slammed shut in his face. This symbolises the independence of the Commons from the Crown. Black Rod then knocks three times at the door with his mace and is invited in and says:

“Mr (or Madam) Speaker, The Queen commands this honourable House to attend Her Majesty immediately in the House of Peers.”

The MPs then walk in pairs to the House of Lords.

(Not) the Queen’s Speech

The speech given by the monarch is in fact prepared entirely by her Prime Minister and his Cabinet. It is traditionally written on a goatskin vellum scroll, although in 2013 this was changed to goatskin parchment paper, which contains no traces of actual goat.

The scroll is delivered on bended knee by the Lord Chancellor, who must then walk backwards down the stairs from the throne, to avoid turning his back on the monarch (which would be a sign of disrespect).

Has the monarch ever missed the State Opening?

Queen Elizabeth II has been absent from the ceremony on two occasions due to pregnancy: in 1959 and 1963 when she was pregnant with Prince Andrew and Prince Edward respectively.

The Lord Chancellor read the speech on those occasions.

Queen Victoria missed the ceremony on many occasions during her long period of mourning following the death of her beloved husband Prince Albert.

In the last 34 years of her 63-year reign, Victoria only attended the event seven times.