All things religious aside, the star of Holy Week in Spain is pastry. Ask tourists and the first thing many remember about a Spanish Easter is its pastries; the unmistakable smell of freshly baked cakes that brings to mind good ol’ traditional grandma’s cooking and that impregnates any street in the old quarters of cities and towns. A mixed smell of musk, incense, orange blossom, honey and baked puff pastry and fried dough in olive oil.

For the majority of tourists arriving in Spain in Easter, those pastries are an exquisite and calorific novelty that they can’t seem to stop eating but for Spaniards – whatever their religious denomination – that kind of sweet culinary art makes them, for a few days a year at least, relive the memory of the flavours of their childhood. It’s 100% authentic gastronomy, guaranteed by the legacy of the recipe books implanted in Spain over many centuries by the three major cultures and monotheistic religions, Judaism, Islam and Christianity. In fact, everything in Spanish gastronomy is nothing more than a great puzzle of Arabic, Hebrew and Christian-Latin pieces that have evolved together. 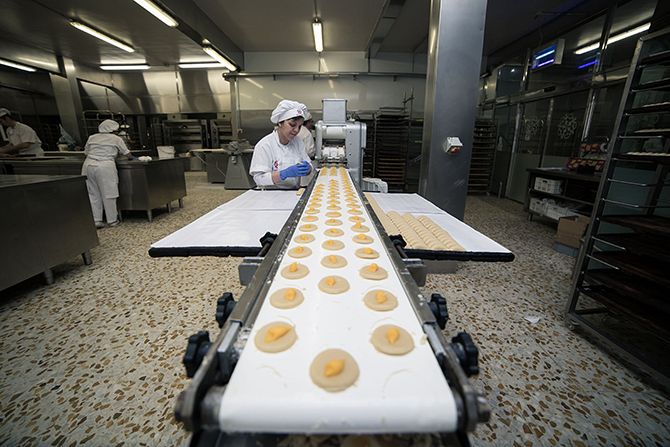 And Holy Week in Spain unites many elements: tradition, religion, history, the change of season marked by the arrival of spring and, of course, gastronomy.
This particular branch of gastronomy is essentially embodied in cakes and pastries. Dried fruits, honey, sugar, cinnamon, oil, sesame, green anise; they are ingredients from three different culinary cultures and three different civilizations covering the two shores of the Mediterranean, from the Middle East to Southern Europe, passing through North Africa. 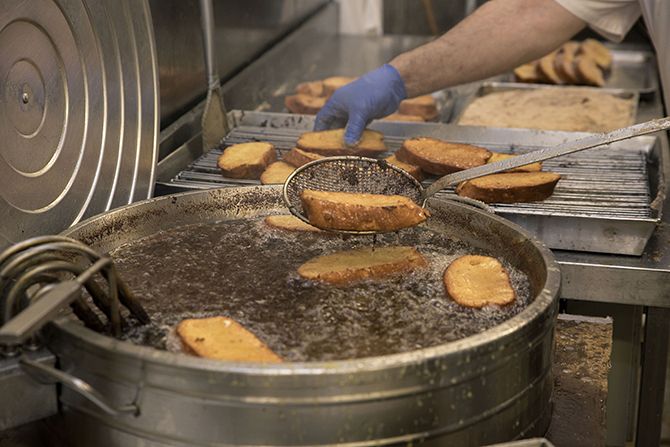 These traditional pastries (torrijas, pestiños, hornazos, gañotes, roscos, buñuelos), although consumed in Spain over the Christian festival of Easter, do not have a Christian origin, but rather Jewish and Muslim beginnings. Moreover, many of these pastries and their ingredients are shared in the major festivities of the three great religions (Holy Week, Jewish Passover and Ramadan). Not to mention the fact that often the best cake shops and bakeries of the Holy Week are located in the old Jewish quarters and in the areas with more apparent Muslim vestiges.

Toledo is known as ‘the city of the three cultures’ because for more than 1,000 years it has been home to Christians, Jews and Muslims. The same can be said for other Spanish towns such as Seville, Granada or Cordoba, with similar historic periods of coexistence. 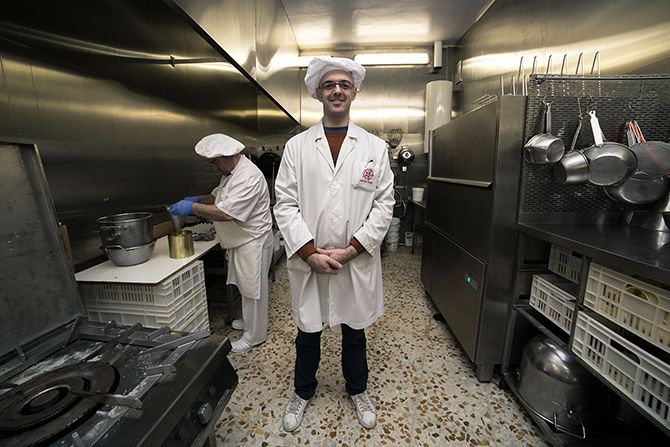 In Toledo, Baker Abderrahman Cañabate is currently in charge of the quality control department of the Horno de Santo Tomé, hailed by many of the most famous international gastronomic guides as “the best pastry shop in the city”. Its prestige relies on its technique, as its pastries and marzipan are prepared in the traditional way and using only the same original ingredients as were to be found almost two centuries ago.

Cañabate’s boss is Ana de Mesa Gárate. She is the seventh generation to wear the white clothes and apron in her typical Christian family, “although it is possible that the origin of the surname De Mesa originates from Converted Jews”, she thinks aloud.

Young Ana, however, is more than just a bakery owner. With a university degree in History, she has good knowledge of the past “and of its influence in the present”, she explains. Horno de Santo Tomé is located in the Jewish quarter of the town, which is accessible via a meandering labyrinth of ascending and descending stone alleys, including Santo Tomé Street itself, next to the Catholic church of the same name. The Christian temple (which even in the early hours of the morning is crowded by tourists visiting ‘The burial of the Count of Orgaz’, one of the most famous paintings of El Greco and exhibited inside) is actually built on the site of a Muslim mosque, and a few meters away from probably the most famous Jewish synagogue in Spain, the Transit Synagogue.

The case of Baker is even more characteristic and striking. He comes from Granada, but has been living in Toledo for many years. He is a Muslim, son of a Jordanian father and a Spanish mother of a Christian family. “You see, and even funnier: my name is Baker,” he tells us, laughing uncontrollably at the reference to the translation of his name into Spanish.

“I am a religious person in my own way… I observe the month of Ramadan, but that’s all. I don’t pray all day, every day. Because here every religion retains its values, and then you get to make pastries and you realize that it is ridiculous to believe that you are exclusive and different, and that you have the absolute truth. Everything is much simpler, it is about mutual respect, nothing else.” 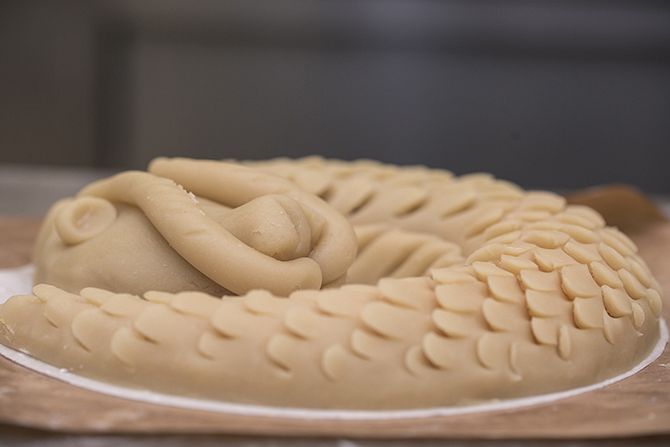 “Here’s a simple example,” he explains. “One of our star products here in the shop is what we call anguila” (a cake shaped like an eel with the face of coiled dragon, made of marzipan and stuffed with seasonal fruit jam and candied spaghetti squash). “It´s quite a popular cake here in Toledo during Holy Week, but as Easter coincides with the Jewish Passover and many Jewish clients order it, on these days we draw a few scales on it with marzipan before putting it in the oven. Why? To turn it into a kosher cake: the Torah prohibits the consumption of fish without scales “.

There are two coexisting theories about the very origin of the name of the most recognized pastry of Toledo, the marzipan. According to one, the word marzipan comes from the Arabic term ‘mautabán’, which means ‘seated king’. The truth is that the shield of the city of Toledo is composed of a two-headed eagle and two kings sitting in an armchair. The other theory takes us to the Christian convent of San Clemente, also in the Jewish quarter and located only 200 meters from the Horno de Santo Tomé. The Christian tradition affirms that during a terrible famine in the 12th Century, the nuns of this convent gave the poor the only thing they kept in their pantries, almonds and sugar, which they milled with a mallet to make a kind of sweet bread (hence the Spanish name ‘mazapán’: bread made with a mallet or ‘pan de mazo’). However, the almonds were introduced to Spain by Arabs, and the term marzipan is also already mentioned in ‘The Thousand and One Nights’.

Millions of tourists flock to Spain every year from all over the world to witness for themselves the distinctive features of Spanish Easter, whose peculiarity and appeal is not only due to the most striking and somehow folkloric elements that compose it (the Nazarenes, flamenco music and military marches or religious pieces of art), but also to the intertwined vestiges of what Moors, Jews and Christians left behind in the form of buildings, art, music and, of course, food.
The history of pre-existing civilizations often behaves like an air bubble trapped in the depths of the Earth. As more sediments layover them, they will usually end up emerging to the surface in some way.

This is what happens in Spain with the three great monotheistic cultures and religions that for almost a millennium reigned over a region that was more territory than country per se. Three different religions with origins so close that it is often impossible to dissociate them.

In present-day cities like Toledo, Seville, Granada, Cordoba, Caceres or Valencia (to mention but a few), hiding the cultural heritage of centuries of shared lives, peaceful coexistence and bloody clashes between Jews, Moors and Christians does not only deprive these cities of chances of economic development and social progress in the 21st century, but, fundamentally, it is impossible to do so, given history’s winning habit of constantly re-emerging and re-inventing itself. 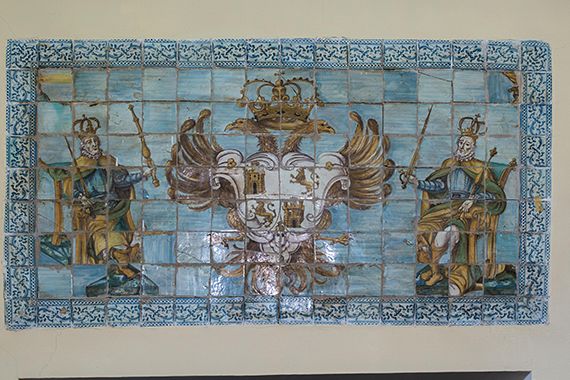 In one episode of The Simpsons, the family travels to Israel, and thus spoke Homer to a multitude of Christians, Jews and Muslims congregated around him: “Some of you do not eat pork. Others do not eat shellfish. But there is something that links us. We agree that we all love chicken. Chicken is our point of union “.