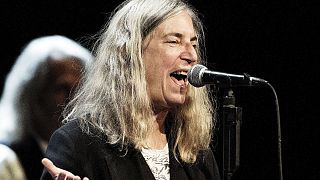 Singer and songwriter Patti Smith needed two attempts to get through Bob Dylan’s “A Hard Rain’s A-Gonna Fall” at the Nobel Prize ceremony in Stockholm.

She forgot the lyrics in the second verse and had to pause to regain her composure, before apologising and asking the orchestra to start over.

She appeared to draw a blank again in the third verse, but only briefly, and finished the song with an emotional performance that left some in the crowd misty-eyed.