The UK’s largest supermarket chain Tesco and one its major suppliers, Unilever, have settled a price war on more than a dozen products.

Products like Lynx deodorant, Ben & Jerry’s ice-creams and Pot Noodle were on the chopping block. Shortages were experienced, notably (to British people in any case) of Marmite.

But what is it? Why do Britons love it so much and why was there a price war to begin with?

Marmite is one of those ‘love-it-or-hate-it’ foods. It is a thick and sticky yeast extract paste and depending on your palate, it either tastes like dirt or you cannot eat breakfast without it.

It was invented in 1902 in Burton-on-Trent and is made using the left-over yeast from breweries. With its black colour it resembles meat extract and has the consistency of motor oil but its nutritional value has seen it become a stalwart of British culture and food.

Marmite is rich in vitamin B12 which helps the body to properly convert carbohydrates into fuel and riboflavin, also aiding enzyme regulation and improving skin health.

It was sent along with British soldiers during both world wars, even becoming a dietary supplement in prisoner of war camps.

As a result, Marmite is an institution – its customers loyal – and the product and company thrive on its uniqueness, launching in the 1990s a “Love It or Hate It” ad campaign that continues today.

Alarm bells rang when it emerged Wednesday that Unilever, a British-Dutch multinational consumer goods company that supplies Tesco, the largest supermarket retailer in Briton, demanded that Tesco raise the price of certain goods by 10 percent to offset the drop in value of the British pound.

Tesco refused. After all, Marmite’s ingredients are all UK-sourced and so should be immune to the Pound’s valuation. The 10 percent price hike was seen by many as a cynical ploy to expand profit margins.

The shortages of products mostly affected Tesco’s online shopping portals, though some shortages were reported on shelves.

They laughed. They said it was project fear. They were wrong. It's real. It's now. Permission to panic #Marmitepic.twitter.com/wmQNPVrNLI

As the news spread, both Tesco and Unilever’s share prices fell by two percent.

By Friday both companies appear to have come to some sort of compromise, although what they agreed to is unclear.

“Unilever is pleased to confirm that the supply situation with Tesco in the UK and Ireland has now been successfully resolved,” Unilever said in a statement. “We have been working together closely to reach this resolution and ensure our much-loved brands are once again fully available. For all those that missed us, thanks for all the love.”

It should take a couple of days for supplies to return to normal. 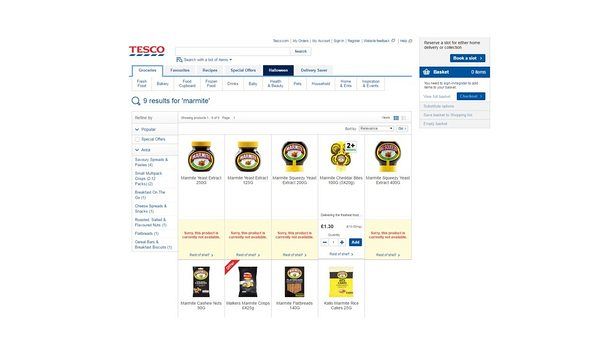 The Tesco Unilever standoff, or Marmitegate, was perhaps the first real consequence of Brexit for many Britons.

The GBP meltdown is causing a Marmite shortage. If anything reverses the referendum result, it's this: https://t.co/Uv5xk3nYwP

Some were quick to point out, despite UK consumers focusing on Marmite, that Unilever produces a myriad of other products. Its demand for a price increase could be the start of worrying signs for British consumers who might start seeing their food prices increase as companies offset rising costs.

On October 10 the British Retail Consortium, which represents 70 percent of the country’s retail businesses, warned the Theresa May government in London that a “Hard Brexit” would likely increase the price of food and clothes.

According to the UK Office For National Statistics, the country’s trade deficit keeps expanding despite hopes a weaker pound would boost demand for British goods.