A controversial first cruise through the Arctic has set sail from Alaska. Due to end in New York in a month’s time, the voyage of the luxury class liner will be watched closely by Crystal Cruises executives, environmental activists and oil companies.

Ice cover varies depending on the season, but summer 2016 appears to have been so warm that a larger-than-usual area of the sea has melted. This, the operators of the Crystal Serenity hope, should enable the ship of over 1,600 passengers and crew to navigate the Northwest Passage. In effect, they’ll be sailing across the top of the world.

Excitement, but at what cost?

The liner offers “authentic experiences” in each port of call as well as on board service ranging from a driving range and putting green to teeth-whitening consultations.

Still, tickets sold out in between 48 hours and two weeks, depending on reports, and there was a waiting list of 7,000 people; enough interest to encourage Crystal Cruises to start planning a repeat trip in summer 2017. 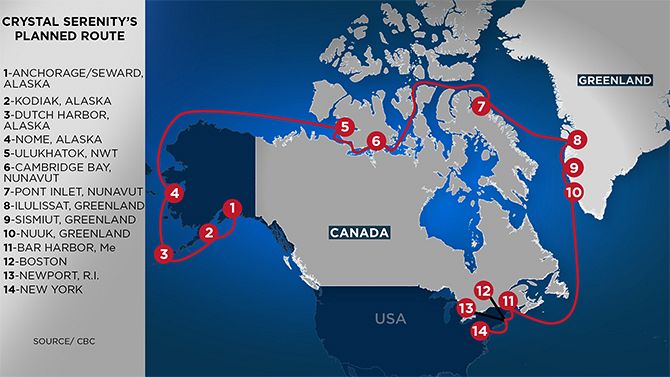 But amid the excitement of an inaugural cruise on a 308-million-euro ocean liner through one of the least-travelled places on Earth, one question must be raised: why is the journey suddenly possible?

The simple answer, scientists say, is climate change. Some predict the Arctic Ocean could become completely free of ice each summer as soon as the next few decades.

“It’s because the Arctic is in meltdown that this cruise can take place. This year we saw the sea-ice crash to a record low for June as it continued its downwards spiral. The loss of sea-ice is bad news for Arctic species like polar bears, walrus and narwhal, and for Arctic people.”

“This voyage symbolises the risk of large-scale cruise ships operating in the Arctic. The unique wildlife is already stressed by a warming climate and the loss of sea-ice, and the arrival of mega-cruise ships in this part of the world could push it further towards the edge,” Downie added.

In an effort to assuage environmental concerns, the cruise liner is being followed by an oil clean-up vessel. Its carbon footprint will also be reduced by burning a low-sulfur oil.

But John Sauven, the director of Greenpeace UK does not seem convinced. He told The Daily Telegraph “The melting of the Arctic Sea ice should be a profound warning for humankind, not an invitation to oil companies and now tour ships to move in.”

The Arctic holds 30 percent of the world’s entire gas reserves and 15 percent of its petrol. Fears are rife that the newly-opened seas will prompt a drilling race among the world’s oil companies.

There are also safety issues at stake. Passengers on the Crystal Serenity are “required to have over 44,000 euros in emergency evacuation insurance before stepping foot on board, the Washington Times reports.

The waters are poorly chartered and the Northwest Passage is isolated and remote in parts. As such, Paul Garcia the Director of Global Public Relations for Crystal Cruises said the liner will receive regular updates from the Canadian Ice Service. The state-of-the-art cruise ship also features “two ice searchlights, forward-looking sonar, a thermal imaging camera and software to improve the ability to pick up small contacts on the radar, such as small amounts of ice,” Garcia told The Washington Post.

So, who stands to gain from the venture?

Crystal Cruises will, of course, stand to make a profit if the maiden voyage proves successful. But the towns, cities and communities visited en route could also gain from what will, in some cases, be an increase in tourism.