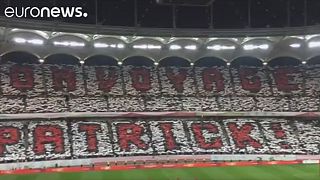 Some 50,000 supporters – gathered on May 17 to watch the Romanian cup final – held cards above their heads spelling out ‘Bon voyage, Patrick’, as well as draping a huge fabric cut-out of the player across one end of the stadium.

Ekeng collapsed in the 70th minute of Dinamo’s league match against Viitorul earlier in May. He was pronounced dead in hospital two hours later.