The people of the eastern Aegean islands have seen their lives change dramatically over the last 12 months.

The inhabitants of the Aegean Islands have shown incredible solidarity. Thanks to them, the consequences of the humanitarian crisis were not so deep.

An unprecedented wave of refugees, many of them fleeing conflict in the Middle East, began engulfing their gardens and courtyards at the start of 2015.

The authorities were taken by surprise, leaving inhabitants and humanitarian organizations to take matters into their own hands. Facing daily, ongoing human dramas, a few thousand Greek islanders have been doing what they can for nearly 900,000 refugees.

A recent online petition has asked for the Nobel Peace Prize to be awarded to these “heroes of the Aegean”.

More than 629,000 people from around the world had signed the petition by February 2016, recognising the contribution of ordinary people in a crisis that even the world’s political powers have had great difficulty in handling.

In 2014, around 41,000 refugees and migrants arrived from the Turkish coast to the eastern Aegean islands. By early 2015, however, those numbers rose dramatically. 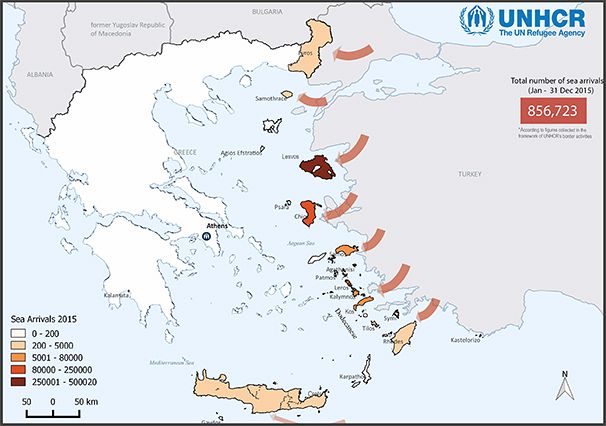 In June 2015, arrivals exceeded 30,000 in just that one month alone. By August, approximately 107,000 people had landed along the Greek coast since the start of the year.

The influx has grown ever since.

In some cases, the number of refugees arriving on islands such as Kos and Lesbos, and smaller ones such as Agathonisi and Leros, was far greater than the number of permanent residents there.

Greek authorities say the negative impact on tourism has been huge and compounded the already significant effects of the long-term economic crisis.

Kos witnessed no fewer than 178,000 hotel booking cancellations, while in Leros and Lesbos cancellations were up 30%.

Despite the difficult situation, the reaction of the local population was remarkable: residents and volunteers mobilised and their stories started to attract the attention of the international media.

Elderly women in Lesbos were feeding the baby of an exhausted refugee mother, while local fishermen signed up to take part in search and rescue operations.

“The inhabitants of the Aegean Islands have shown incredible solidarity. Thanks to them, the consequences of the humanitarian crisis were not so deep. Otherwise things would have been much worse.”

Ordinary people and dozens of aid organizations have been working at the heart of the crisis. Among them, the NGOAngkalia (in Greek it means “embrace”), which was launched ten years ago in Lesbos to help local people in need. When the big wave of refugees arrived, “Angkalia” was there.

The warehouses of the organization were turned into makeshift hotels for refugees. In recent months, members and volunteers have distributed food, medicine and clothing to more than 17,000 people.

“We reached our limits, we can hardly get any sleep, but we don’t allow ourselves to stop. Local people have a positive attitude towards the refugees, although Greece is in crisis, Many young people help us.”

Recently “Angkalia” received an honorary award by the Council of Europe.

“The heroes of the Aegean deserve the Nobel Prize”

Avaaz, a global web movement, launched its online campaign for residents and volunteers who help refugees in the Aegean Sea to be rewarded with the Nobel Peace Prize:

“Ordinary residents of Greek islands and other volunteers have been on the front line of Europe’s refugee crisis for months, opening up their hearts and homes to save hundreds of thousands fleeing war and terror. For their compassion and courage, for treating those in danger with humanity, and for setting an example to the rest of the world, we citizens from around the world, nominate these brave women and men for a Nobel Peace Prize”.

The online petition has already been signed by more than 629,000 people from all over the world as of February 1, 2016.

The proposal to the Norwegian Nobel Peace Prize Committee is supported by academics from 24 universities from around the world seeking recognition for the “Aegean Solidarity Movement”. The informal movement includes all groups, ordinary people and NGOs involved in the rescue and aid operations.

Alkmini Minadaki, an architect and Avaaz member from Crete who started the campaign, believes the unity shown by the islanders has been remarkable:

“Across the islands everyone from fishermen, housewives, pensioners and teachers have opened their arms and homes for the refugees who have landed with nothing. Their actions have drowned out the fear and racism and reminded us that we’re one and united in our humanity.”

The candidacy of the Greek islanders for the Nobel Peace Prize is also supported by 18 MEPs spanning five different political groups, who have expressed their support by sending a letter to the Norwegian Committee.