But did you remember that today, August 12, it is the annual celebration of these magnificent creatures?

Be kind to elephants. Or this little guy will get you. ;) #WorldElephantDaypic.twitter.com/EZHyI2UdOR

We are celebrating the largest land animal this day #WorldElephantDaypic.twitter.com/p2HJtlQBzF

But it should also make us all think about the reality facing many elephants today, amid an ivory trade that animal rights groups say has fuelled a surge in poaching.

In summary, it’s a “relephant” day.

What is World Elephant Day?

The event, conceived by Canadian filmmaker Patricia Sims and the Elephant Reintroduction Foundation, is designed to highlight the plight of the mammals.

One of this years initiative is the #elegrams launched by nature.org. The idea is to make or draw 20,000 elephants to raise funds.

The situation for both African and Asian elephants remains ‘exceedingly dire’, according to World Elephant Day organisers. 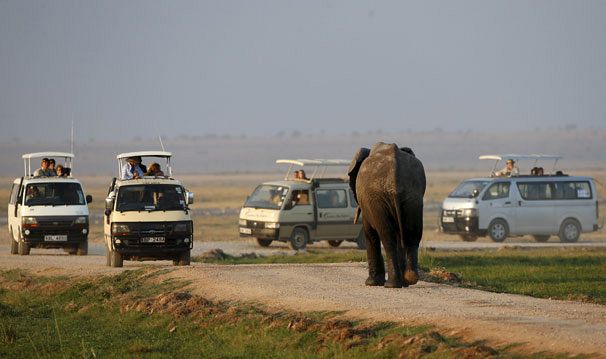 African elephants, which include the larger savannah species that roams grassy plains and the smaller forest variety from central and western Africa, are said to be in a vulnerable position.

When an elephant bull decides to cross the Tsavo, even Mombasa Road big wigs stand back #WorldElephantDay… pic.twitter.com/Rsy58vC1m5

The World Wide Fund for Nature says that in the early 20th century, there may have been up to five million African elephants. But there are now just 500,000.

Celebrate the LARGEST living land mammals on the planet. It's World #ElephantDay! pic.twitter.com/EwtwvC565h

While media attention has concentrated on African elephants, World Elephant Day says: “The Asian elephant is just as beleaguered, if not more so, and continues to experience its own set of unique challenges.”

This year’s event puts particular emphasis on the plight of the Asian elephant and its fight for survival.

Classified as ‘Endangered,’ there are fewer than 45,000 Asian elephants left in the world today.

Elephants in south India are among those targeted by poachers, with a resurgence in the illegal trade being reported.

Poachers stalk elephants of Kerala after a gap of 20 years: http://t.co/y12jYOPTVJ#JointheHerd@WildlifeRescuepic.twitter.com/tnEqhQkAOF

What threats do elephants face?

The illegal trade in elephants’ ivory tusks is the main threat to their existence in Africa.

Conservationists says it is responsible for falling numbers of the mammals in the region.

A ban on ivory was introduced in the late 1980s but WWF says poaching remains a ‘chronic, significant problem’ in parts of Africa, especially where wildlife management authorities are underfunded.

In Asia, where there are fewer elephants, the threat is loss of habitat, due to the growing human population. Other reasons include the expansion of agriculture, large-scale deforestation and palm oil plantations. 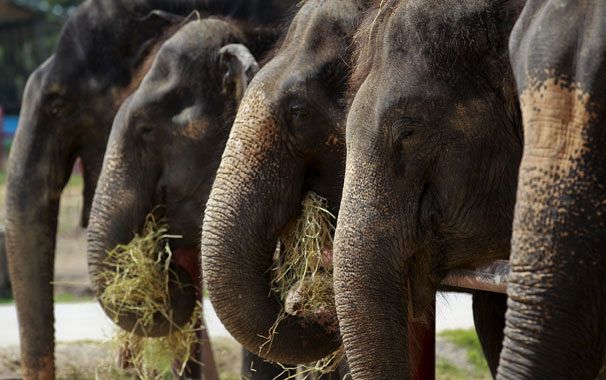 What’s being done to tackle the problem?

Campaigners point to several moves worldwide that, it is hoped, will help address the problem of poaching elephants for their ivory.

Similar moves have been announced in China, a country that has been cited as a key influence in the increasing illegal trade of ivory since 1951.

Meanwhile worldelephantday.org claims new legislation in Thailand has also helped the situation. It’s claimed it has helped to cut the amount of ivory on sale in the country by 85 percent.

Patricia Sims, co-authoring an article on worldelephantday.org. said: “The sad reality is that the more rare the elephants become, the more valuable the ivory. Like any commodity, this value of its rarity will be what ultimately drives the elephants to extinction – unless we do something about it. We have to consider what our role is in nature, as humans. Are we not to be stewards of the environment?

“The barbaric slaying of majestic, iconic beings such as the magnificent tuskers Mountain Bull and Satao in Kenya last year, and Cecil the Lion just a few weeks ago in Zimbabwe are brutally profound and symbolic reminders that we, as a species, are still far from being stewards of the environment. Rather, the polar opposite seems to be true – we are the destroyers of it.” 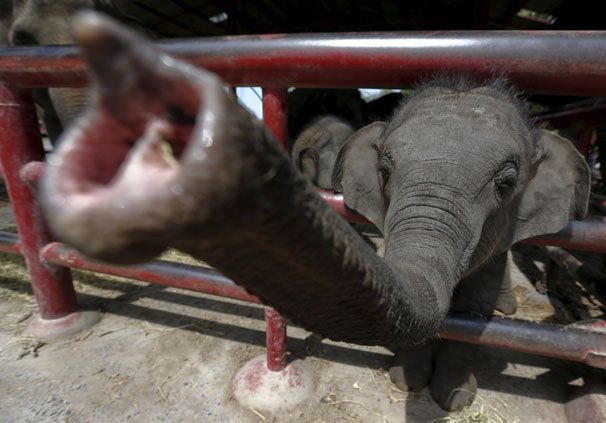 An elephant stretches its trunk out of an enclosure at a camp in the ancient Thai capital Ayutthaya, north of Bangkok, Thailand, August 11, 2015. Thailand celebrates World Elephant Day on August 12, an annual event held to raise awareness about elephant conservation. REUTERS/Chaiwat Subprasom.