A young man was shot by police during protests to mark the first anniversary of the killing of unarmed black teenager Michael Brown, officials said on Monday.

Demonstrators took to the streets of Ferguson, Missouri, late on Sunday to honour the 18-year-old’s memory.

But tensions flared after officers exchanged gunfire with one man; he is now in hospital in a critical condition.

His name has not been released by police, but a local newspaper named him as 18-year-old Tyrone Harris.

Photos and videos reportedly from the scene and distributed on social media show a bloodied man being handcuffed on the ground.

A St. Louis County police officer looks at a black man who has been loaded into an ambulance after a police officer-involved shooting in Ferguson. Reuters/ Rick Wilking 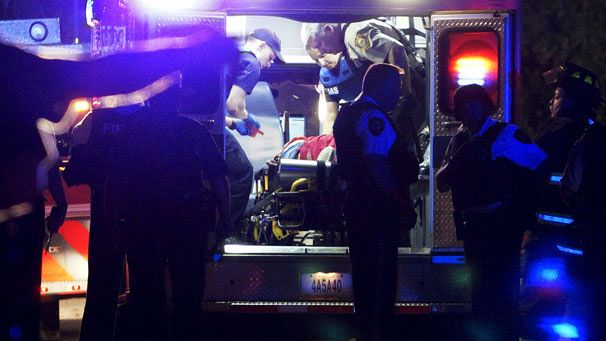 Michael Brown’s killing rocked the United States last year, shining a spotlight on racial relations across the country and sparking months of protests.

He was shot dead by white police officer Darren Wilson after a heated argument; Wilson was never charged and has since retired from St Louis Police Department.

A US Justice Department report in March accused the local Ferguson force illegal and discriminatory enforcement actions against African-Americans.