On the 70th anniversary of the first atomic bomb test, a brief history of nuclear weapons and a look at which countries have them today.

The 1930s saw both groundbreaking developments in atomic science and the rise of fascism in Europe. It was a dynamite combination.

When scientists produced calculations that showed nuclear weapons were theoretically possible, it triggered fear that Nazi Germany could be working to produce one.

Nuclear physicist Albert Einstein wrote a letter to US President Franklin Roosevelt, indicating that Germany could be developing an atomic bomb and advising him to start a nuclear programme.

Roosevelt heeded the warning and a US nuclear programme, which came to be known as the Manhattan Project, was born.

The project, in which the UK and Canada were also involved, began modestly – but went on to employ more than 100,000 people. Most of them were not told the ultimate purpose of the work they were doing.

The complexity of the atom bomb’s design led to concerns about whether it would work.

Thus, the US conducted a test, codenamed Trinity, at the Alamogordo Army Airfield in new Mexico.

The first atomic detonation had taken place – a mere rehearsal – but it would be less than a month until a nuclear weapon was unleashed for real. 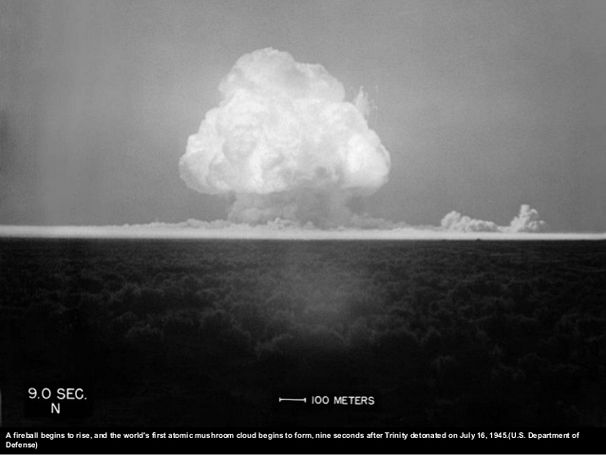 World War II in Europe had concluded on 8 May 1945, when Nazi Germany surrendered, but the Pacific War dragged on.

The US, together with the UK and Canada, called for the unconditional surrender of the Japanese armed forces on 26 July.

Japan did not surrender.

On 6 August, the US dropped a uranium gun-type atomic bomb (known as Little Boy) on Hiroshima, destroying five square miles (13 square kilometres) of the city.

Three days later, a plutonium implosion-type bomb (known as Fat Man) was dropped on the city of Nagasaki.

Around half of the deaths in each city occurred on the days of detonation.

The bombings of Hiroshima and Nagasaki remain the only confirmed occurrences of nuclear weapon use in warfare.

During World War II, the USSR had also begun work on a nuclear arms programme.

The Treaty entered into force in 1970.

Which countries now have nuclear weapons – and how many do they have?

The US, the UK, Russia, France and China are nuclear weapon states, as designated by the NPT

Since 1970, India, Pakistan and North Korea have conducted nuclear tests.

North Korea, which was a party to the NPT, withdrew from the treaty in 2013 and has continued to conduct nuclear tests.

Israel is also widely believed to have nuclear weapons.

South Africa developed a nuclear weapon arsenal, but disassembled it before joining the NPT.