It was French writer Gustave Flaubert who said there is no truth, only perception. According to the Institute of World Policy in Kyiv, Europeans have a rather negative image of Ukraine.

In a recently released report war, Russia and poverty appear to be the three key words that average citizens of Europe’s most populous countries associate with the country.

The Orange revolution appears to be better known by the respondents than the Maidan protests which spun Ukraine towards Brussels, but European perceptions of Ukraine are beginning to change, if slowly, according to Olena Hetmanchuk, head of the Institute of World Policy.

“I don’t think that they (the Europeans) associate or consider Ukraine to be a part of Russia as they perceived some time ago. In my opinion, the association with Russia is primarily related to Russia’s aggression. That’s a logical association as this issue has been one of the main topics of European media for the last year.”

On the subject of Ukraine eventually joining the EU, the French are the most skeptical while, the British are largely indifferent. 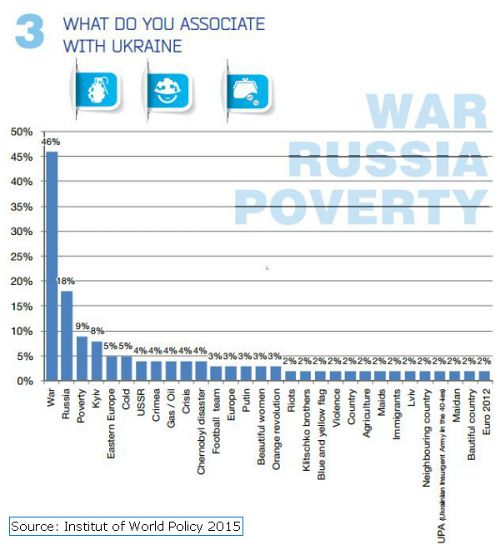 In order for Ukraine to create a better image in these countries, political scientist Volodymyr Fesenko told euronews the country “needs to compensate for this with the successful implementation of reforms in the country; the promotion of Ukraine’s history that should be considered as a part of European history. That will increase the percentage of people who will perceive Ukraine as a part of Europe, not only geographically, but also politically and historically.”

According to the report just 30 percent of Europeans believe that Ukraine should be provided with EU membership in order to protect the country from future Russian agression, but many also responded that in order for the doors to be opened, corruption and oligarchy must be stamped out – a view also held by many Ukrainians.

The mission of the Institute of World Policy (IWP) is to develop analytical research and implement projects in order to promote European standards and practices inside Ukraine, as well as to increase support of the foreign opinion leaders, EU and NATO officials for the European and Euro-Atlantic aspirations of Ukraine.