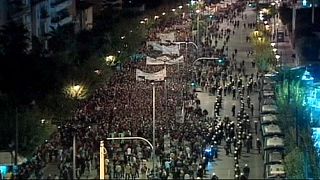 Greek police used tear gas and stun grenades on Monday (November 17) to disperse a few dozen demonstrators at an otherwise peaceful rally that marked the 41st anniversary of a deadly student uprising against the country’s former dictatorship. The annual rally in Athens was attended by 20-thousand people and was policed by some 7-thousand officers, deployed to prevent a potential repeat of violence seen in previous years.