It has been described as the deadliest such attack in years.

Police spokesman Micky Rosenfeld said: “we are viewing this as a terrorist attack.” 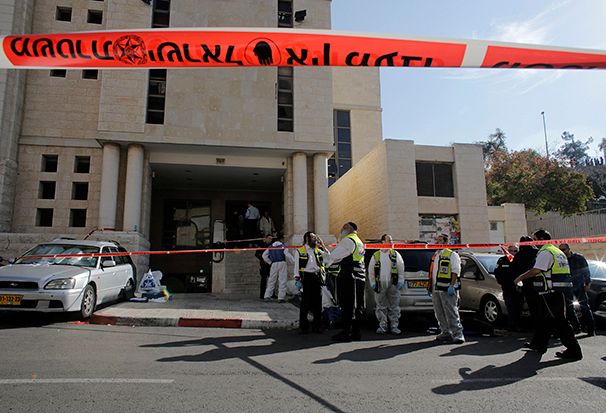 Pictures posted online by an Israeli army spokesman showed a man in a Jewish prayer shawl apparently lying dead on the floor of the synagogue and a bloodied butcher’s cleaver discarded nearby.

“The presidency condemns the attack on Jewish worshippers in one of their places of prayer in west Jerusalem and condemns the killing of civilians no matter who is doing it,” his office said in a statement. 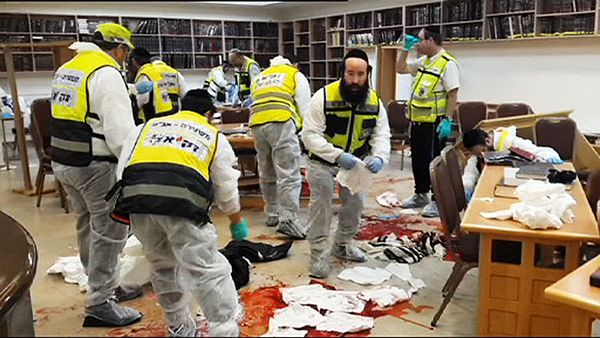 US Secretary of State John Kerry described the attack as “an act of pure terror and senseless brutal murder.”

“I call upon the Palestinian leadership at every single level to condemn this in the most powerful terms. This violence has no place anywhere,” Kerry said.

However Islamist group Hamas praised the attack: “Hamas calls for the continuation of revenge operations and stresses that the Israeli occupation bears the tension in Jerusalem,” Hamas spokesman Sami Abu Zuhri said.

Several other Palestinian factions applauded the attack, including the Abu Ali Mustafa Brigades, which released a statement greeting the Palestinian people in Jerusalem and “their ongoing struggle to protect the city against the Israeli occupation.”

The statement “blessed” the attack on the synagogue, and any resistance activity whose goal is to “uproot settlers and occupiers.”

Islamic Jihad also commented on Tuesday’s attack: “The operation in Jerusalem was a natural reaction to the crimes committed by the Israeli occupation and its settlers,” a statement said.

Additionally, the Popular Resistance Committees described the attack as “heroic.”

It said it was a response to “the Israeli occupation’s crimes against our people and our holy places in occupied Jerusalem.”

Israeli Prime Minister Benjamin Netanyahu said: “We will respond with a heavy hand to the brutal murder of Jews who came to pray and were killed by lowly murderers.” 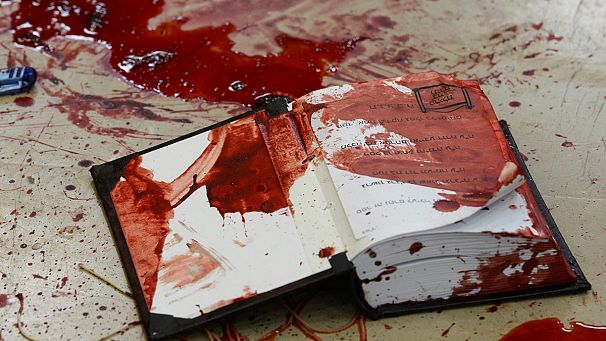 Tuesday’s attack comes after weeks of deepening unrest in Jerusalem, areas of Israel and the Israeli-occupied Palestinian territories. That tension has partly been fuelled by attempts by militant Jews to pray in the Al Aqsa mosque complex, Islam’s third holiest site, as well as the plans to step up construction of new homes for Jewish settlers.

Killings on both sides have increased, inspiring Israeli fears of another mass Palestinian uprising, or intifada.

There are reports that Tuesday’s synagogue attack was in response to the death of a Palestinian bus driver who worked for the Israeli bus company Egged.

Youssef Ramouni, 32, was been found hanged inside his vehicle. Israeli officials had described the incident as a suicide. However the man’s family suspect foul play. His brother saw the body and said there were bruises and marks that suggested he had been tortured.

“The signs on his body do not show that he wanted to commit suicide. Thank God, he wasn’t sad and he had no problems in his life that would have brought him to commit suicide,” said the driver’s father.

Hundreds of mourners at Ramouni’s funeral on Sunday chanted for revenge. Hamas called for retaliation. 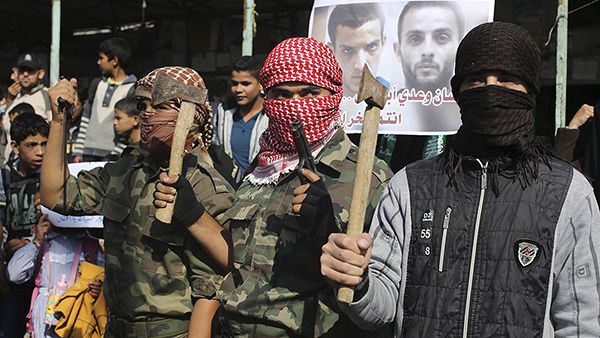 In recent weeks, two knife attacks within hours of each other left a woman and a soldier dead and two other Israelis injured.

The young woman was attacked along with two others outside a Jewish settlement in the West Bank. The attacker, reported to be a Palestinian, was shot by a security guard. He was taken to hospital with serious injuries.

In the other incident, an Israeli soldier was stabbed and mortally wounded in Tel Aviv. Police say a Palestinian was arrested. He was reported to be from Nablus in the occupied West Bank.

The stabbings came just days after the third incident of a vehicle used to ram pedestrians in Israel. A policeman, a woman and a baby died in those attacks.

Israel’s Prime Minister Benjamin Netanyahu ordered that the homes of Palestinians in Jerusalem accused of carrying out the attacks be demolished.

The Palestinian driver in the most recent ramming incident in Jerusalem was shot dead by police.