As the year comes to an end, euronews’ digital team rounded up thirteen of the memes and viral videos that were widely shared over the Net in the last 12 months.
In no particular order, dive back into our selection of the fun but frivolous viral hits that flooded the online world in 2013.

It all started with a drunken basketball fan in 1980s New York. Then at the end of January 2013 a vlogger known as Filthy Frank posted his own version on YouTube, which was picked up by a group of Australian high-school students. Then, it took the planet by storm.

Russian dashboard and CCTV cameras seem an inexhaustible source of viral videos, recording most often brutal car accidents, drunken street fights or just plain old WTF moments. But once in a while they are the privileged witnesses of something from another world. On February 15 at about 09:20 local time, a bright ball of fire lit up the skies over the Southern Urals as what would be known as the Chelyabinsk meteor entered the Earth’s atmosphere at almost 60 times the speed of sound. The meteor exploded in an airburst that created between 20 and 30 times more energy than the Little Boy bomb that was dropped on Hiroshima in 1945. This airburst and the following shockwave injured around 1,500 people and damaged 7,200 buildings in the area, for what is undoubtedly one of the most striking videos of the year.

Falling short of becoming 2013’s Gangnam Style, Norwegian comedy duo Ylvis’ song still managed to rack up a whopping 287 million views (at time of writing). And that is just for the official music video. If the song (and music video) lampoons the typical mainstream electronic music flooding dance floors Europe-wide, its “stuck-in-your-head” factor is undeniably high. “What does the fox say” was even covered by the cast of US TV series Glee, a fact that can either be seen as an achievement for Ylvis or a desperate move from the Glee producers to stay relevant with what their viewers are watching online.

Baby videos are a staple for viral hits. This one is no different, with equal parts emotions and cuteness. Recorded on August 1 and uploaded on October 18, it shows ten-month-old Mary-Lynne Leroux of Ontario, Canada, tearing up as she listens to her mother Amanda’s a cappella cover of Rod Stewart’s “My heart can’t tell you no”. This musical-themed upload struck a chord for about 28 million viewers in only a few months.

The US federal government shutdown The US federal government shutdown was a particularly active time for discussions online – read partisan bickering – as each side was blaming the other for the situation that lasted from October 1 until October 16.

This picture, which first emerged on Reddit, was catapulted into viral stardom by Buzzfeed in a post entitled “This Adorable Sad Image Is Now The Official Photo of the US Government Shutdown.” Some users online have raised questions about whether the picture is staged, while the Washington Post published a column from someone wo knows the child in real life. Disregarding this dose of healthy scepticism, the picture managed to encapsulate one of the many highly unfair situations caused by the shutdown.

Prominent on blogging platform Tumblr, doge has nothing to do with a Venetian leader. This meme, which became popular in 2013 but can be traced back to the end of last year, is like a recipe for internet meme-ness. It includes 1) pictures of a dog, of the 2) admittedly cute Shiba Inu breed, 3) originating in Japan, with 4) text in cutesy broken English, written in – possibly ironically, 5) Comic Sans font. Said text can be adapted for each situation.

As Gawker.com explains: “Like any good meme, the text adheres to an easy-to-follow formula, which starts with “Wow,” then continues something like “Such X,” and “Many X,” “So X,” where X is words related to the background image.” 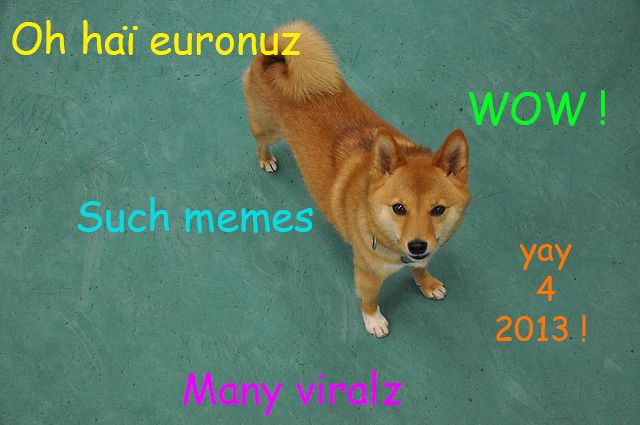 What does a viral-video-editor do when she or he wants to quit her or his job? Make a viral video about it! That is what happened when then-video-editor Marina Shifrin got sick of the allegedly poor working condition at her job for Taiwanese Next Media Animation and went out with a bang. Her video, of her dancing to the tune of Kanye West’ “Gone” with subtitles enumerating her grievances, went viral and has now reached 17 million views.

A few days later, her former employers answered to announce… they were hiring a replacement.

Sour grapes? The dislike ratio under this video – with 2 “dislikes” to 1 “like” – would suggest what the netizens think.

If twerking (a possible portemanteaux of “twist” and “jerk”) has been popular in the Southern US hip-hop and strip club culture since the early 2000’s, and can be linked to traditional African and Caribbean dances, it reached the mainstream spotlight in 2013. All it took was for former American sweetheart Miley Cyrus to grind and twerk against the groin of Robin Thicke during a performance at the MTV Video Music Awards. The Internet went crazy, with results like this, emerging around Thanksgiving:

The word was added to the Oxford Dictionary Online, Oxford English Dictionary’s younger and more reactive brother, under the definition “twerk, v.: dance to popular music in a sexually provocative manner involving thrusting hip movements and a low, squatting stance” according to QZ.com.

Twitter launched mobile video app Vine on January 24. It allows users to make a 6-second looping video clip, with sounds. Short, easily shareable and embeddable on the Web, it aimed to become the tool of reference for bite-size viral videos.

Vine reached its full potential during the Boston bombings, when a user posted a Vine of the recording of the exact moment the bomb near the finish line exploded.

Since then, Vine has gotten more popular, often with lighter content, and now funny Vine compilations abound on video sharing platforms. Photo sharing app Instagram launched its own video service not long after, with 15-second clips and the possibility of using rudimentary editing tools as well as the famous Instagram faux vintage filters.

At euronews, we use Vine for our Vine of the day, 6 seconds of the most significant, dramatic or surprising footage of the day. For instance:

Take a famous pop culture scene, mimick it with your friends in front of a camera and boom, you have now a meme. Hadoukening refers to video game Street Fighter Ken’s fireball; Vadering to Star War’s Darth Vader irascible force-choking of insubordinate subordinates. Selfies, or digital self-portraits, have been everywhere online since at least Myspace, and its misleading “Myspace angle.” This year, people on the Internet took it up a notch and decided to take selfies in unexpected places, including at funerals.

A whole Tumblr was dedicated to record what many saw as a new low in behaviour triggered by the spread of mobile technology. People do inappropriate things online, nothing really new.

Then, US president Barack Obama, British PM David Cameron and Danish PM Helle Thorning-Schmidt took a selfie during the funeral service for Nelson Mandela on December 10. This act secured ‘selfies at funerals’ a spot on our list. You can read the AFP photographer version of the picture here.

Scientists are still unable to prove the common theory that the Internet is made of cats, but cat and kitty pictures are a large share of the content online. This year, one cat’s grumpy face was everywhere.

Meet Tardar Sauce, nicknamed Grumpy Cat by the Internet thanks to her furrowed furry brow. She is a real star, complete with manager. She won BuzzFeed’s Meme of the Year Award at the 2013 Webby Awards and even got invited to the super geeky South by Southwest festival in Austin, Texas.

And this despite, arguably, not being cute; her grumpy face is actually a medical condition caused by feline dwarfism and an under bite.

Take a popular music video and mix it up with the oddly human-sounding bleating of various goats. It is very silly, but then that’s what memes are for.