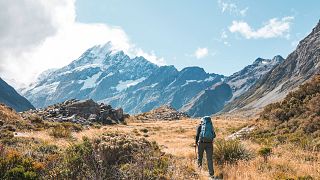 New Zealand is known for its pristine landscape - but locals fear it could suffer from overtourism   -   Copyright  Canva
By Charlotte Elton  •  Updated: 12/12/2022

After two and a half years, New Zealand has lifted its final restriction on international visitors.

Travellers flying into the country are no longer required to fill out a declaration form disclosing their COVID-19 vaccine status and travel history - meaning unvaccinated people are once again welcome in the country.

The rules were originally announced in September, but the change was confirmed in updated Foreign Office travel advice on Friday

For two years, New Zealand had some of the harshest border restrictions in the world.

But as it opens up, New Zealand - globally renowned for its pristine natural landscape - has a message for visitors.

The government has passed new laws restricting ‘freedom camping’. While local communities have written destination management plans to guard against “overcrowding and the negative effects of tourism.”

In over-subscribed Milford Piopiotahi, proposals include capping daily entry at 4,000 and introducing an international visitor fee.

Individual tourism businesses are also seeking to 'green' their own operations, with 1600 signing up to TIA’s “sustainability commitment.”