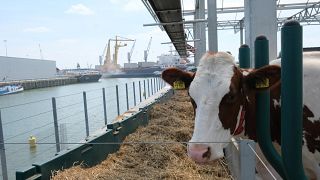 The world’s first floating farm is currently moored at Rotterdam’s port, with tens of cows aboard.

It’s been there since 2019, when husband and wife Peter and Minke van Wingerden decided to create a farm that could withstand the impacts of climate change - in particular, flooding.

The idea for a floating farm came to the couple after Peter, an engineer, experienced the aftermath of Hurricane Sandy in New York, where he was working on a floating housing project.

The thousands of food trucks which bring fresh products to New York every day could no longer come into the city, and New Yorkers ran out of fresh food “within days”, according to the couple.

The duo started investigating a solution for cities reliant on long food supply chains and vulnerable to extreme weather exacerbated by climate change.

The answer was a locally-based, climate-adaptive and energy-efficient floating farm which uses technology to deliver sustainable, small-scale farming.

In 2019, the construction of a floating farm was completed in Rotterdam, one of the Dutch cities most vulnerable to rising sea levels. Built on three levels, the farm hosts a stable, a floor for manure and a floor dedicated to capturing rainwater.

The floating farm is almost completely energy self-sufficient: it generates all of its electricity from solar panels and obtains fresh water from an integrated rainwater collection and purification system.

How are the animals cared for on a floating farm?

The cows are fed with grass from playing fields and golf courses in Rotterdam, supplemented by waste food products like potato scraps, and their manure is used as fertiliser.

The animals’ well-being is also at the heart of the way the van Wingerdens want to run their open-air stable. Each cow has its own stall on the floating farm’s green cow garden and is able to roam freely on dry land in a neighbouring field.

But the floating farm is not without accidents: two cows reportedly fell into the harbour basin and had to be rescued, sparking criticism from the Dutch Animal Welfare Party. The party called on the city council to remove the farm’s permit to operate in Rotterdam, but the motion did not pass.

Despite this setback, the floating farm has been thriving over the past three years, and the initial number of dairy cows aboard, 32, has now grown to about 40 (the maximum capacity of the floating stable).

Each year, they produce some 320,000 litres of raw milk, which is sold locally and nationally, according to Beladon, the Dutch company that built the farm. A small shop on land allows locals to buy the products directly from the source, while visitors are regularly allowed to come in for group tours of the farm.

No personnel are needed to milk the cows, as this task is left to automated robots.

Floating farms also bring other advantages, including reintroducing farming into the city with minimal impact on resources like fertile agricultural land and the environment. This makes them an attractive solution in places where there’s land scarcity.

Peter and Minke van Wingerden are looking into expanding their project to a second floating farm, dedicated to chicken and vegetables. The plan was to build it last year, but the couple said they have not yet received the necessary permit from city authorities.