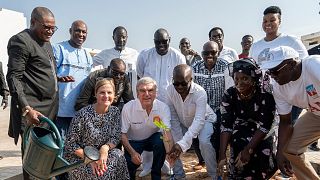 Turning the desert into a forest is no easy task.

But that’s exactly what the International Olympic Committee has set out to do.

The sporting body has collaborated with charity Tree Aid to sponsor the Olympic Forest - an initiative to plant 590,000 trees across Mali and Senegal over the next four years.

“The Olympic Forest is a key driver of the IOC’s ambition to move from now being a carbon-neutral to a climate-positive organisation in 2024 and helps us to remove more carbon from the atmosphere than we emit,” he says.

“With this, we want to lead the way for the entire Olympic Movement.”

What is the Olympic Forest?

The forest is part of the ‘Great Green Wall,’ an African-led scheme to seed vegetation across degraded land in 22 countries in the Sahel region.

Launched in 2008, the wall is a community led, nature-based solution to protect ecosystems and maximise fertile land.

When complete - hopefully by 2030 - this “living symbol of hope” will stretch 8,000 kilometres across Africa, according to the United Nations Convention to Combat Desertification (UNCCD).

“It is a concrete example of man and nature working together to create a unique legacy – a new world wonder for the next generation,” they say.

The trees help local communities by protecting food supplies and fostering liveable conditions. They do so by improving soil health and preventing desertification, creating fertile land to grow crops. It will also create 10 million jobs by 2030, UNCCD claim.

“It had been five years that we had not seen a lot of trees. As a consequence, there was no rain and a lot of dust,” she says.

“The Olympic Forest project is beneficial for the local populations and mostly women and children. For instance, in our village, several species of fruit trees have been planted like lemon trees, mango trees and mahoganies, which greatly helps us to combat undernutrition and malnutrition”.

Why is the Olympic Forest good for the planet?

A single tree can absorb 20 kilograms of carbon dioxide from the atmosphere each year.

They are also a rich habitat for wildlife and their roots improve the capacity of soil to absorb water - reducing the risk of wind erosion.

There are roughly 3 trillion trees on the planet, but this is just half the number that existed before human civilisation.

Initiatives like the Great Green Wall are urgently needed. Every year, 15 billion trees are cut down - dwarfing the 5 billion that are planted.

The IOC hopes that its contribution to the Great Green Wall will sequester approximately 200,000 tonnes of carbon dioxide equivalent.

This will enable the organisation to become climate-positive by 2024.

“The Olympic Movement is about building a better world through sport, and the Olympic Forest demonstrates our commitment to this vision,” explainsBach.

Watch the video above to see how the Olympic Forest is greening the desert.