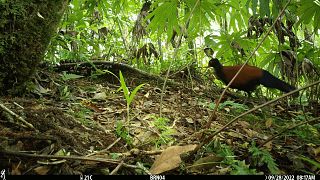 A team of scientists and conservationists has rediscovered the elusive Black-naped Pheasant-Pigeon, a large, ground-dwelling pigeon that only lives on Fergusson Island.   -   Copyright  Doka Nason/American Bird Conservancy.
By Charlotte Elton  •  Updated: 22/11/2022

A rare bird last spotted 140 years ago has been found in Papua New Guinea, delighting researchers.

The black-naped pheasant pigeon was last documented by scientists in 1882.

Local hunters have reported occasional sightings since then. But in recent decades the bird has flown under the radar, fuelling fears that it might have gone extinct.

New footage - captured by scientists on a month-long expedition in September- proves that the bird lives on.

The new discovery was like ‘‘finding a unicorn,’ expedition co-leader John Mittermeier says.

“It is the kind of moment you dream about your entire life as a conservationist and birdwatcher,” he says.

What is the black-naped pheasant pigeon?

The black-naped pheasant pigeon only lives on Fergusson Island, a rugged island in the D’Entrecasteaux Archipelago off eastern Papua New Guinea

The island is mountainous and thickly forested, making the search for the bird extremely difficult. In 2019, a team of researchers tried and failed to find the bird.

This time round, the team laid 12 camera traps in a remote location suggested by a local hunter who had heard the bird’s distinctive call. With just two days to go of the month-long exhibition, researchers weren’t optimistic

“When we collected the camera traps, I figured there was less than a one per cent chance of getting a photo of the black-naped pheasant-pigeon,” said Jordan Boersma, postdoctoral researcher at Cornell Lab of Ornithology and co-leader of the expedition team.

“Then as I was scrolling through the photos, I was stunned by this photo of this bird walking right past our camera.”

What is the Search for Lost Birds?

The expedition was supported by American Bird Conservancy and the Search for Lost Birds.

The Search for Lost Birds - a collaboration between BirdLife International, American Bird Conservancy and Re:wild - is a global effort to find 10 birds that haven’t had confirmed sightings in more than a decade.

In order to properly protect rare birds, researchers have to work out where they are living, so that they can work out what specific environmental threats they face. Targeted expeditions are therefore essential to conservation efforts.

“This rediscovery is an incredible beacon of hope for other birds that have been lost for a half century or more,” said Christina Biggs, manager for the Search for Lost Species at Re:wild

“The terrain the team searched was incredibly difficult, but their determination never wavered, even though so few people could remember seeing the pheasant-pigeon in recent decades.”

Nearly half (49 per cent) of the world’s bird species are declining, and one in eight are threatened with extinction. At least 187 species are suspected to have gone extinct since 1500.