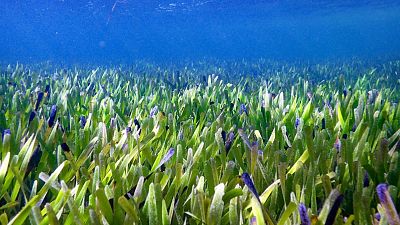 The world’s largest plant - a seagrass the size of 28,000 soccer fields - has been discovered off the coast of Australia.

More than 4500 years ago, a single seed planted in the sun-drenched waters of what is now the World Heritage Area of Shark Bay in WA.

Over the next four millennia, this individual seed spawned a mammoth seagrass covering more than 200 square kilometres, roughly three times the size of Manhattan.

Scientists from the University of Western Australia and Flinders university initially thought the plant was a meadow of different sea grasses.

“To find out how many different individual plants are growing in a seagrass meadow, you have to test their DNA,” Dr Elizabeth Sinclair, lead author on the research, wrote.

“We did this for meadows of ribbon weed seagrass called Posidonia australis in Shark bay.

“The result blew us away: it was all one plant. One single plant has expanded over a stretch of 180 km making it the largest known plant on Earth.”

Why is this giant sea-grass special?

Seagrasses are marine plants which produce flowers, fruit, and seedlings annually, like their land-based relatives.

These underwater seagrass meadows grow in two ways: by sexual reproduction, which helps them generate new gene combinations and genetic diversity, and also by extending their rhizomes, the underground stems from which roots and shoots emerge.

This giant sea-grass grows in the second way, slowly spreading outwards at a rate of roughly 35 cm a year.

Using that rate, the authors of the research – published in Proceedings of the Royal Society B – estimate the ancient plant is at least 4,500 years old.

The plant thrives over lots of different conditions across the bay, with temperatures ranging from 15C to 30C.

It is more than 400 times as large as a 43-hectare stand of quaking aspen trees in Utah, previously named the world's largest plant.

Other than its abnormal size, the plant has twice as many chromosomes as its relatives. This makes it what scientists call a “polyploid”.

Polyploids are often sterile, but can continue to grow indefinitely if left undisturbed. This seagrass has done just that.

Other huge seagrass plants have also been found, including a closely related Mediterranean seagrass called Posidonia oceanica, which covers more than 15 km and may be around 100,000 years old.

In the summer of 2010–11, a severe heatwave hit land and sea ecosystems along the Western Australian coastline.

Shark Bay’s seagrass meadows suffered widespread damage in the heatwave. Yet the ribbon weed meadows have started to recover.

This is somewhat surprising, as this seagrass does not appear to reproduce sexually – which would normally be the best way to adapt to changing conditions.

Even without successful flowering and seed production, the giant plant appears to be very resilient.

Seagrasses protect our coasts from storm damage, store large amounts of carbon, and provide habitat for a great diversity of wildlife. Conserving and also restoring seagrass meadows has a vital role in climate change mitigation and adaptation.

“Seagrasses are not immune from climate change impacts: warming temperatures, ocean acidification and extreme weather events are a significant challenge for them,” Dr Sinclair explained.

“However, the detailed picture we now have of the great resilience of the giant seagrass of Shark Bay provides us hope they will be around for many years to come, especially if serious action is taken on climate change.”