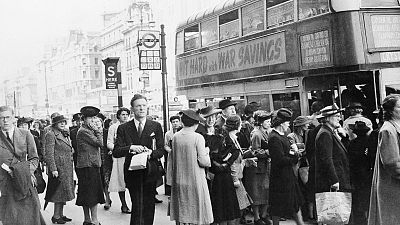 The Second World War is often held up as a time of self-sufficiency, camaraderie and action that Brits can revisit in times of crisis. Victory gardens sprung up, and pleasure driving was virtually eliminated to save fuel for troops.

Faced with a cost of living crisis intensified by Russia’s invasion of Ukraine, are there lessons from that time that can help us now?

Academics aren’t so sure. Though there’s a comparable need to rapidly cut oil and gas consumption, our fuel-frugal image of the Second World War doesn’t stand up, says David Edgerton, professor of modern British history at King’s College London.

“The whole image of the war involving belt-tightening is an extrapolation from the civil sector, an inappropriate extrapolation,” he tells Euronews Green.

The UK actually doubled its imports of oil during the Second World War to expand its military.

“You could very plausibly argue that World War Two in fact unleashes a new kind of energy intensity.”

People had seen the power of oil. Private car ownership - which was very low in 1939 - shot up after the war in ‘the great acceleration.’

The transport situation is very different now, of course. Over 70 per cent of households own a car in the UK, and travel is responsible for 40 per cent of our emissions, according to climate charity Possible.

The International Energy Agency’s (IEA) new 10-point plan to cut oil use in response to Russia’s invasion, makes clear how important de-caring now is to de-carbonisation.

Measures such as car-free Sundays in big cities and cheapening public transport will look familiar to anyone who has been following greener city initiatives in Europe over the last few years.

Some aspects will be familiar to students of history too, such as the guidance to reduce speed limits on highways by at least 10 km/h. During the 1973 oil crisis, a temporary national speed limit of 50mph (80 km/h) was set for all UK roads.

It can be tricky to know what to do with these echoes of (literally) darker times, alongside the calls for emission-cutting measures so urgently needed for the future. We need to be honest about the conflicts of the past, but here are some lessons worth remembering.

A behavioural change campaign could be effective

“There's a need for a public information campaign, so that people actually know what they can do to make a difference,” says Professor Michael Bradshaw, a global energy expert at Warwick Business School.

There’s no doubt about the incredible speed at which the economy adapted to the existential threat posed by the Nazis. From rearming just before the war to the height of battle, UK defence spending soared from 10 to 50 per cent of GDP. Posters and broadcasts from the Ministry of Information played no small part in this.

During the 1970s, with the 1973 oil crisis followed by miners’ strikes, a ‘Save It’ campaign ran to reduce energy waste.

The IEA - formed in 1974 in response to these major energy disruptions - has highlighted a number of domestic measures that could get us off Russian gas. These range from replacing gas boilers with heat pumps and improving home insulation, to turning the thermostat down by one degree.

But as yet, there’s no serious government-backed campaign to change people’s energy habits in response to the energy crisis. Earlier this month, Bradshaw told MPs on the Commons business committee that that needs to change.

Other countries’ energy struggles offer informative precedents too, he added - such as Japan’s response to the Fukushima nuclear plant disaster in 2011. The crisis prompted a nation-wide electricity-saving strategy.

“Given what we’ve been through in the pandemic,” Bradshaw says, “we are also used to the government telling us what we can and cannot do.” This far more recent collective memory shows how crucial clear (and fair) messaging is.

What kind of energy crisis are we facing?

One thing we need to be really clear about is the nature of the energy crisis we’re facing, says Bradshaw.

“It’s unfortunate that it’s all being dressed up as an energy security and energy supply issue, which suggests the problem we’ve got to solve is getting more oil and gas from whatever source but Russia.”

The UK gets less than 4 per cent of its total gas supply and 8 per cent of oil from Russia, according to 2021 government figures, so it’s not necessarily a supply problem we’re facing.

But the EU imports more than ten times that much gas from Russia, and what we’ve learned quickly over the last six months is that we are exposed to the same price risks, explains Bradshaw.

“If the European gas market is stressed and results in very high prices – those are our very high prices. It’s not a physical security of supply challenge; but we’re all in the same boat when it comes to price.”

The 70s crisis catalysed huge changes to European energy systems. France switched to nuclear after 1973, Sweden dropped its heavy oil dependency, and the UK and Netherlands pursued a ‘dash for gas’ in the North Sea.

Fossil fuel giants are trying to use the current crisis to resurrect their development plans, with Shell eyeing up the Cambo oil field again. As commentators have pointed out, it would only pay off if oil prices, and demand, stay high for a decade. It is akin to betting against net zero.

Against the backdrop of climate change and decarbonisation, “we need to avoid doing things that lead to long term regrets,” says Bradshaw.

Energy mobilisations need to be fair

“If we look at World War Two, the way that energy rationing worked, the messaging was fair shares for all,” argues environmentalist and acclaimed author Naomi Klein.

“There were high profile crackdowns on celebrities and big businesses to show that the over-consumers have to lead this. And actually the poorest people consumed more under rationing.”

As the UK’s energy crisis is primarily a cost of living crisis, what measures has the government put in place to alleviate the burden on the poorest?

Last week Chancellor Rishi Sunak cut fuel duty by 5 per cent. But analysis by the Joseph Rowntree Foundation found that households on lower incomes benefit less because they do not own a car in the first place. Those that do use less petrol than richer families.

Scrapping the 5 per cent VAT on energy-saving materials will make it easier for middle-income households to install solar panels and other green upgrades, but not help those most in need.

Meanwhile big polluters are being let off the hook, campaigners say.

“It’s astonishing that the chancellor continues to allow fossil fuel firms to rake in enormous profits while cash-strapped households struggle with their bill,” says Mike Childs, head of policy at Friends of the Earth.

“A windfall tax on these companies could have funded energy efficiency and eased the burden on those most affected. The measures introduced today will only scratch the surface of what’s needed to help people save energy.”

What do historians think about the future?

“We already have the means to change the energetic basis of society very radically. If we really want to and have the political will to do it,” Professor Edgerton says.

“A lot of talk about technology is a way of avoiding changing things.”

Ramping up renewable energy production is an essential part of the solution to Europe’s supply constraints and the climate crisis. But when it comes down to it, we need to reduce demand.

Insulation is key, says Edgerton, and “we could do an awful lot by cutting down the size of cars.”

Simple measures like these are yet to be pieced together into a bold, coherent environmental plan from the government.

“Green politics makes a mistake in thinking that war is potentially a good thing,” he adds. But even if there’s no use conjuring up the Blitz spirit, we can realise the importance of clarity and fairness in what’s next.