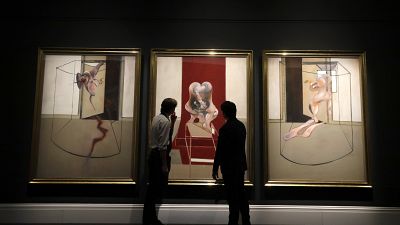 A selection of paintings by the artist Francis Bacon is about to go on display at London's Royal Academy of Arts.

'Francis Bacon: Man and Beast'' will open on 29 January and features an extensive range of artworks that explores the artist's obsession with the physicality of human and animal bodies.

Who was Francis Bacon?

Francis Bacon was a Dublin-born, British figurative painter - best known for his bleak, raw and emotional interpretations of the human condition.

Something of a drifter, he came to painting seriously in his 30s and made his first splash at the end of World War II.

He drew his inspiration from personal experience but also current events.

Bacon's work is also characterised by the influence of his meticulous study of the human anatomy, which resulted in paintings that seem to overlay portraits and anatomical drawings.

He also relentlessly studied and observed animals, even travelled to South Africa to see some in their natural habitat.

His art could be summarised by his series "Study for Bullfight" in 1969, which subtly blurs the human matador and the bull.

"It looks at a particular aspect of his work because Bacon, throughout his life, throughout his career really, was fascinated by animals, but also by, let's say, the animalistic within us as humans," says Axel Rϋger, Secretary and CEO of the Royal Academy.

"I think there's a good spread of works by Bacon here, and we see that there's a lot of different phases of his life and some works I've never seen before," says Tabish Khan, Art critic for The Londonist.

'Francis Bacon: Man and Beast' will run from 29 January until 17 April.

The Royal Academy of Arts warns that the exhibition contains adult content.

Check out the video above for a preview of the exhibition