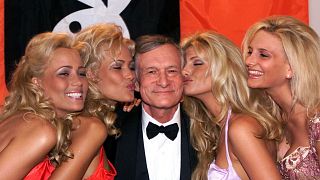 A new 10-part docuseries is set to expose the dark side of the Playboy legacy and its founder Hugh Hefner.

'Secrets of Playboy' delves into the complex world Hefner created and examines its consequences on Western culture's view of power and sexuality.

The series documenting the empire's rise and fall debuts in the US on January 24, on television network A&E, with a back-to-back premiere followed up by weekly episodes. A European release date is TBA.

Expect interviews and commentary from former affiliates of Hefner, including his former Playmate girlfriend Sondra Theordoe, and PJ Masten, who worked as a 'bunny mother'.

"If the history of Playboy was told through women's voices, what would they say?" asks director Alexandra Dean.

Was Playboy's sexual liberation a 'smokescreen'?

Playboy was founded in 1953 by the late Hugh Hefner and his associates.

The company started out as a men's lifestyle magazine, which became known for its centrefolds of nude female models.

But the legacy of Hugh Hefner and Playboy is problematic.

Dean found that although Hefner projected Playboy as being inclusive, pro-feminism and sexually liberating, that was really just a "smokescreen for what was really going on."

The series is said to hone in on questions of consent, drug use and manipulation within Playboy as a wider organisation.

The tainted legacy of Hugh Hefner

The dark documentary paints an ugly picture of the late Hugh Hefner's behaviour and practices.

The allegations in the documentary present Hefner as a “monster”, who used drugs to victimise and take control of the women around him.

However, Dean said not everyone she approached to be interviewed had something negative to say about the magazine's founder.

"Most women you talk to about Playboy are still loyal to Hef and really support the organisation in their experience and everything about it. And I want to be really clear that I don't think this doc invalidates their experience," clarifies Dean.

Check out the video above for a preview of the 'Secrets of Playboy'.