Heavy shelling and fighting have continued in the east and south as Russia's army attempts to establish control over the region.

Read more about Sunday's events as they unfolded in our blog below.

Swiss say no to Berlin's requests to send ammunition to Kyiv

Switzerland has rejected two requests by Germany to export its ammunition to Ukraine, citing the Alpine nation’s strict neutrality.

The decision was first reported on Sunday by the Swiss weekly Sonntagszeitung.

“Both requests from Germany, whether the ammunition received from Switzerland can be passed on to Ukraine, were answered negatively with a reference to Swiss neutrality,” Switzerland’s State Secretariat for Economic Affairs confirmed.

Germany needs Switzerland’s consent for the arms delivery as part of the original sale contract. The Swiss office declined to specify what type of ammunition Germany had sought to export to Ukraine.

Pope Francis has renewed his call for an Easter truce as Orthodox Christians celebrated Easter Sunday when the faithful mark the resurrection of Jesus.

Without naming countries, Francis urged aggressors to “stop the attack to help the suffering of the exhausted people.”

Francis told a crowd gathered in St. Peter’s Square that two months had passed since Russia’s invasion of Ukraine and said that “instead of stopping, the war got worse."

"It is sad that in these days that are the holiest and most solemn for all Christians, the deadly clamor of arms is louder than the sound of bells announcing the Resurrection,” he said in his address.

Ukraine’s President Volodymyr Zelenskyy says he has discussed the evacuation of civilians from Mariupol in a call with Turkish President Recep Tayyip Erdogan.

Zelenskyy said on Twitter that he “stressed the need for immediate evacuation of civilians from Mariupol, including Azovstal, and immediate exchange of blocked troops” in Sunday’s call with Erdogan.

He noted that the call came before Erdogan’s planned conversation with Vladimir Putin.

Ukraine has urged Russia to allow the evacuation of civilians holed up at the giant Azovstal steel plant, the last remaining Ukrainian pocket of resistance in the strategic Sea of Azov port.

It also has pushed Russia to conduct talks on a safe exit for the Ukrainian defenders of the plant, but Moscow has stonewalled the demands.

Zelenskyy said he and Erdogan also discussed the course of the negotiation process and possible security guarantees for Ukraine from Turkey and other nations.

Erdogan's office said he told Zelenskyy in their call that Turkey is ready to mediate and assist in talks between Ukraine and Russia.

Civilians in Mariupol 'must be allowed to evacuate now', UN says

The United Nations on Sunday called for an "immediate" truce in Mariupol to allow the evacuation of some 100,000 civilians still trapped in this Ukrainian port city that Moscow claims it has under almost complete control.

"We need a pause in the fighting right now to save lives. The longer we wait, the more lives will be at risk. They must be allowed to evacuate now, today. Tomorrow will be too late," UN coordinator in Ukraine Amin Awad said in a statement.

Kyiv said earlier on Sunday that Russian forces were continuing to shell the city on the Sea of Azov, which has been under siege since early March by the Russian army, including the Azovstal steel plant, the last pocket of resistance by Ukrainian fighters.

"The Russian enemy continues to fire at and blockade our units in Azovstal, including by air strikes," the Ukrainian General Staff said in a statement.

OSCE concerned about arrest of its observers in Ukraine

The Organisation for Security and Co-operation in Europe (OSCE) says it is extremely concerned about the detention of several Ukrainian members of its monitoring mission in the country's east.

In a brief statement Sunday, the Vienna-based body said that it is “using all available channels to facilitate their release.” A spokesperson declined to specify how many national mission members were detained, when or by whom.

Several OSCE observers have been killed or injured since the body’s 57 participating states established a mission to monitor the conflict in eastern Ukraine eight years ago. Russia recently vetoed an extension of the mission.

A Ukrainian presidential adviser has urged Russia to allow civilians to leave a steel mill in Mariupol besieged by the Russian forces.

Mykhailo Podolyak, an adviser to Ukraine’s President Volodymyr Zelenskyy, appealed to Russia on Twitter to announce a truce in Mariupol on Orthodox Easter Sunday and immediately open a humanitarian corridor for civilians holed up at the giant Azovstal steel plant.

He also challenged Russia to conduct a round of talks to negotiate an exit for the Ukrainian defenders of the plant.

The Russian military is attacking the plant with heavy bombs and artillery barrage and is accumulating forces and equipment for an assault, Podolyak said.

While some Ukrainians approached the Eastern holiday with defiance, others shared the concern of the authorities that Russian forces could increase the bombardment of Ukrainian towns and cities over the holiday weekend.

A number of local leaders tightened the curfew measures until a country-wide curfew was imposed on Saturday. Citizens were asked not to leave their homes unless necessary, while churches postponed all religious services until Sunday morning. 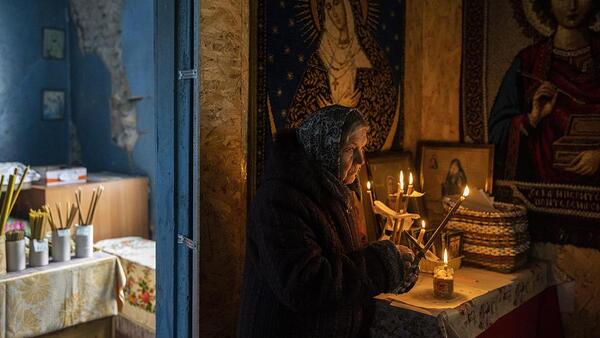 euronewsAs the Eastern Orthodox faithful celebrate Easter on Sunday, the holiday is a sombre occasion in the country at war.
09:52

The Ukrainian military said it destroyed a Russian command post in Kherson, a southern city that fell to Russian forces early in the war.

The Ukrainian military intelligence agency posted a statement on Saturday saying the command post was hit on Friday and two generals were killed and one was critically wounded.

Oleksiy Arestovych, an adviser to Ukrainian President Volodymyr Zelenskyy, said in an online interview that 50 senior Russian officers were in the command centre when it came under attack. He said their fate was unknown.

The Russian military did not comment on the claim, which could not be independently confirmed.