Thousands of Rohingya refugees wait near the Anjuman Para border crossing in the Cox Bazaar district of Bangladesh.

Stranded on small strips of land just a few metres wide, they are hoping to gain access to nearby refugee camps that lie inside the Bangladeshi border.

This is the fourth wave of Rohingya to come through Anjuman Para since August 25th, when Myanmar’s military started a crackdown against the Muslim minority.

At one point in mid-October, a surge of more than 35,000 displaced people flooded the small border area.

In all, more than 620,000 Rohingya have crossed into Bangladesh in less than three months, desperate to flee the terrible conditions at home.

“The soldiers set fire to my father’s house with my parents inside,” says 25-year-old Rashida. “They were burnt alive. The military took everything from them”.

“We couldn’t move after 6pm, and we needed permission to work. At first they took the cattle and then everything else”. 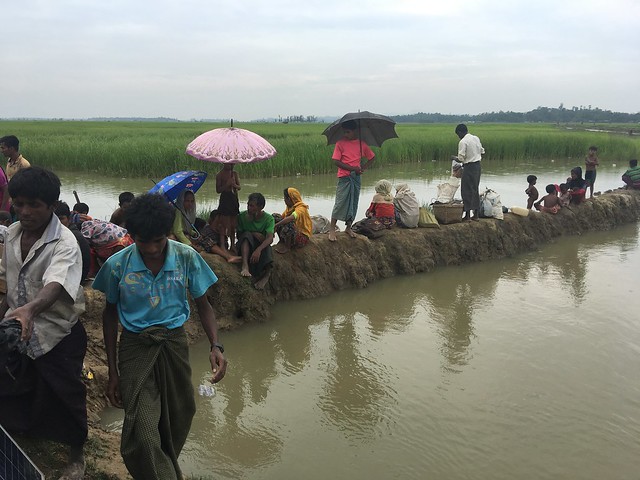 There are now some one million Rohingya living in one of the poorest countries in the world – and the arrivals haven’t stopped.

Aid organisations have honed their strategies to assist refugees when there are mass entries from the Burmese side of the river Naf. A network of contacts alerts mobile teams to converge on the site.They arrive with doctors, food and water. Authorities can take days to give the green light for the newly arrived refugees to remain in the country.

Some refugee settlements emerge spontaneously. The existing Kutupalong camp has been extended and now hosts close to half a million people. It’s an overcrowded city of mud, bamboo and tarpaulin.

The growing humanitarian crisis is in dire need of a political solution, says Christos Stylianides, European Commissioner for Humanitarian Aid.

“We have to persuade the Myanmar government that we talk about human rights. It’s not a religious conflict, it’s not a religious issue. It’s just human rights, fundamental rights for any person, for any human being. I agree with UN Secretary General Guterres that maybe the only description for this situation is ethnic cleansing”.

Rafika Begum arrived in Kutupalong two months ago. Her parents were shot dead in Myanamar while they were fleeing their village. Her grandmother is now taking care of her.

euronews spoke to the two women at a centre run by Action Against Hunger – a EU funded NGO that is providing them with food and basic assistance.

“I was really hungry when I came here,” Rafika remembers. “After having had my first meal, I felt better as I hadn’t eaten anything for seven days during the journey into Bangladesh”.

The ACF centre used to feed only pregnant and lactating women but since August it provides meals to anyone in need. It started with 800 meals a day, but it’s now many, many more.

Fifteen chefs helped by a large group of Rohingya volunteers prepare some 50,000 meals per day. Up to 7,000 meals are served inside the facility, while 43,000 are distributed within the camp and to the makeshift settlements around it.

Humanitarian assistance has been scaled up across the board. Over 70,000 liters of water leave the ACF centre daily to be delivered to makeshift camps where refugees have no source of clean water or buckets to carry it.

Sixty percent of Rohingya refugees in Bangladesh are children and they have high rates of malnutrition.

Twenty-one percent of the children under the age of five suffer from malnutrition, according to the United Nations Children’s Fund, Unicef. Despite the humanitarian aid provided, child malnutrition has worsened since last year.

“We screen more than one hundred children every day only through this centre,” Roy explains. “Apart from this, we are doing a massive screening of children under five in the communities and we go out with our mobile teams.”

The majority of the children they screen are moderately to severely malnourished, Roy says. “They look traumatised”.

Most of the refugee children arriving in Bangladesh are traumatised and struggle to adapt to their new life. A children’s centre in the camp offers them a space where they can play and talk.

Eshita Farhana Rahman is a psychologist with ACF:

“Now on average we have one hundred follow up cases at the moment we are observing and we are giving them individual counseling as well as group discussion sessions so that they can have a good coping mechanism on them”.

Myanmar’s Northern Rakhine State, the traditional home of the Rohingya, is almost entirely off limits, even to NGOs. Christos Stylianides was the first EU Commissioner to enter Rakhine when he visited last May. He said it was a painful experience.

“I realised that the situation was completely fragmented. There is no communication among communities, and this is the major obstacle to see the reconciliation process on the ground”.

The UN says it has found evidence that Myanmar’s military engages in incitement to religious intolerance, including “summary executions, enforced disappearances, arbitrary detentions and torture”.

The stories told by thousands of Rohingya appear to confirm these findings.

“In the past two or three years, torture became more violent, it was like we were in prison,” says Nur Jahan, a Rohingya refugee now living in the Kutupalong camp. “We couldn’t move, women were tortured and raped, children were killed, I saw this with my own eyes. We didn’t have any freedom, this is why I came here to Bangladesh, I came to Bangladesh to find peace”.

All the groups consulted spoke of fear for their physical safety and security on account of being stateless #IBelonghttps://t.co/qXCEWEUOCSpic.twitter.com/jLwO2tqJRD

To stop the flow of Rohingya into one of the poorest countries in the world, Bangladesh and Myanmar have signed an agreement on the repatriation of refugees. It’s a policy cautiously supported by the EU.

“There are a lot of obstacles to see real repatriation of the Rohingya, frankly speaking,” Stylianides says. “But as the European Union, we focus on this process as it is the only way to see a real peaceful situation on Rakhine State.”

The UN also supports repatriation in the long run but for now it fears that if Rohingya like Rafika and her grandmother return to Myanmar, they could be detained in camps instead of being allowed to go home.