There was no letting up for Usain Bolt as he easily won gold in the 200 metres on a rainy night in Rio, keeping the sprinter on course for an Olympic “treble treble” ahead of the 4 × 100 metres relay.

The Jamaican seemed disappointed with his time – 19.78 seconds – the same as in his semi. 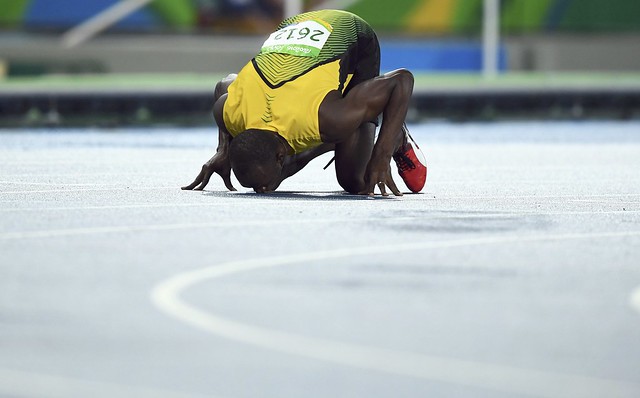 Canada’s Andre de Grasse came second ahead of Christophe Lemaitre of France – who was delighted to take bronze after pipping Britain’s Adam Gemili by only thousandths of a second. Both recorded official times of 20.12 seconds.

The USA’s Ryan Crouser snatched gold at the last in the men’s shot put, breaking the Olympic record with his fifth attempt.

The 23-year-old’s fifth throw was the longest of his life – 22.52 metres – shattering the record set by the former East Germany’s Ulf Timmermann at Seoul in 1988.

It was a one-two for the US with Joe Kovacs taking silver and New Zealand’s Thomas Walsh winning bronze.

There was more American success in the women’s 400 metres hurdles. Dalilah Muhammad was way ahead of the field from start to finish. Her compatriot Ashley Spencer took bronze ahead of Denmark’s Sara Slott Petersen.

Britain’s Eilidh Doyle was eighth but almost simultaneously there was more British gold as away from the track Jade Jones was becoming double Olympic champion in taekwondo.

The men’s decathlon saw a display of sportsmanship as striking as the stamina involved in the multi-sport event.

The USA’s Ashton Eaton won his second straight Olympic gold. He and silver medallist Kevin Mayer of France paid warm tributes to each other after a close contest.