The most consumed illegal drug in Spain is cannabis or, more precisely, cannabis resin. Spain’s geographical proximity to Morocco, one of the world’s main cannabis resin – or hashish – producers, is an important factor in its high rate of consumption.

The percentage of people who have used cannabis at least once has now decreased to 27.4 percent after reaching a maximum high of 31.2 percent in 2009. The percentage of cannabis consumers has almost doubled since 1995.

The second most popular illegal drug is cocaine with 10.2 percent of the population having used it at least once. This has increased from 1995, when the figure was 3.4 percent. Spain is also the main entry point for cocaine in Europe. 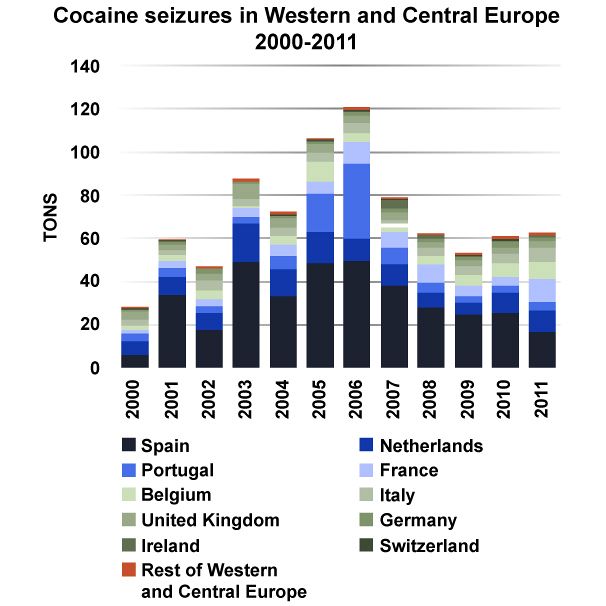 But authorities are also on high alert regarding legal drugs. Teenage alcohol consumption and the use of narcotics by adults are among the Government’s priorities in fighting drug abuse.

The number of frequent consumers has slightly decreased, with 9.6 percent of the population having used cannabis at least once in the last 12 months and 7 percent in the last month, according to the latest survey. (Graph in the same study).

Concerning cocaine use, 3.6 percent of men admitted to consumption over the past 12 months compared to 0.9 percent of women.

It’s the opposite where legal narcotics are concerned, with 7.6 percent of men and 15.3 percent of women having used them in the last 12 months.

The number of people being treated for abuse of or addiction to cocaine has slightly decreased in recent years but figures relating to people asking for treatment for cannabis addiction have “sky-rocketed”.

Cannabis is the most popular drug among youths with 13.4 percent of 15 to 17-year-olds having used it at least once in the last year. Cocaine is also popular when it comes to young people between the ages of 15 and 34.

The average age for people starting to use drugs is 18 for cannabis, and around 20 years old for cocaine, ecstasy, amphetamines. On average, consumption of legal narcotics starts much later, at around the age of 34 and a half. These figures have remained steady over time.

The percentage of under 18s who have used cannabis at least once has increased from 21 percent in 1994 to 33 percent in 2010. However, after a peak of 42.7 percent in 2004 cannabis use has been falling every year since.

Spain’s drug prevention programme relies on the Spanish National Drug Strategy 2009-2016. The programme is led by the National Drug Plan, part of the Public Health Ministry. The Spanish prevention policy seeks for better coordination between a) the media, b) schools, healthcare centres and social care centres c) the entertainment and leisure industries d) security forces.

The National Strategy is divided into different objectives, such as reducing the demand for drugs, reducing the supply, improving scientific knowledge, education and international cooperation.

Drug consumption is not a crime in Spain, and the Government is proud of it. When consumed in public, it’s considered a “serious breach” of the Law on the Protection of Citizens.

After the devastation caused by heroin use and HIV during the 1980s, Spanish authorities decided to focus on “curing” drug addicts – considered sick people – while punishing drug traffickers. This model still applies today.

As Spain is a decentralised state, each region has its own policies and its own drug commissioners. Regional governments enforce policies autonomously. Catalonia, for example, plays host to more than 200 cannabis smokers’ clubs, easy to find in any street, while in Madrid there are fewer, they are more secret and the police has been known to raid some of them.

Drug-trafficking is considered a crime by the law and is punished quite severely, with possible penalties as high as 20 years in prison.