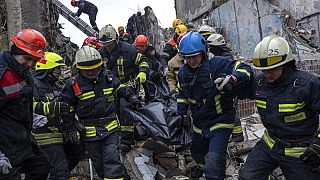 Residents in Dnipro come to terms with life after deadly attack

Watch: Residents in Dnipro come to terms with life after deadly missile attack

Russian strikes on an apartment building in the Ukrainian city of Dnipro on Thursday killed at least 45 people, including at least six children.

Russian strikes on an apartment building in the Ukrainian city of Dnipro on Thursday killed at least 45 people, including at least six children.

Olha Botvinova was among the 79 or so people that were injured in the attack. Detailing her account of the events, Botvinova admitted that she feels lucky to be alive.

She had been sitting with her husband in their bedroom when the missile hit the apartment block and tore through their kitchen.

"When you survive the situation we had on 14 January, you understand that God is giving you one more chance to live. It's a miracle", she said.

The nine-story apartment tower that took the direct hit housed about 1,700 residents and stood in between two identical buildings. Emergency crews worked nonstop for three days to search the wreckage for the dead and missing.