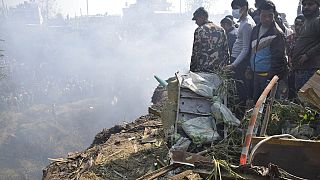 At least 68 people were killed when a plane crashed in central Nepal on Sunday, according to Nepalese officials.

At least 68 people were killed when a plane crashed in central Nepal on Sunday, according to Nepalese officials.

The Yeti Airlines flight from Kathmandu to the resort town of Pokhara was carrying 68 passengers, including 15 foreign nationals, and four crew members when it crashed on landing, according to Nepal’s Civil Aviation Authority.

It was not immediately clear what caused the plane to crash.

The plane caught fire following the crash, sending a thick plume of smoke into the sky.

Rescuers arrived at the crash site near the Seti River, some 1.6 kilometres away from Pokhara International Airport.

The European Union has banned all Nepali carriers from its airspace over safety concerns.

The Himalayan country also has some of the world's most remote and tricky runways, flanked by snow-capped peaks with approaches that pose a challenge even for accomplished pilots.

The weather can also change quickly in the mountains, creating treacherous flying conditions.