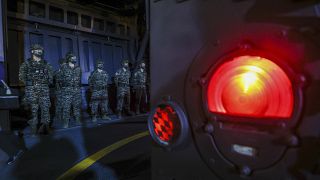 Taiwan’s military continued to hold military exercises on Thursday simulating joint forces against an invading enemy from the sea in the south of the country.

Taiwan’s military continued to hold military exercises on Thursday simulating joint forces against an invading enemy from the sea in the south of the country.

Amphibious tanks and soldiers of the Marine Corps were seen shooting at targets at the Naval Base in Kaohsiung.

China has stepped up its pressure on Taiwan’s military in recent years by sending warplanes or navy vessels on an almost-daily basis toward the self-ruled island.

Watch the No Comment by clicking on the player icon above.