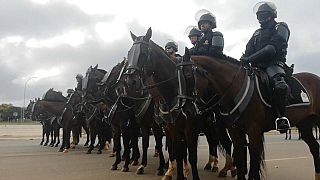 The clean-up begins in Brazil’s capital

Broken windows, smashed chairs, stones in the street: the damage outside Brazil's presidential palace and Supreme Court in the aftermath of the assault by supporters of former president Jair Bolsonaro.

Broken windows, smashed chairs, stones in the street: the damage outside Brazil's presidential palace and Supreme Court in the aftermath of the assault by supporters of former president Jair Bolsonaro.

On Sunday, hundreds stormed Brazil's Congress, its presidential palace, and the Supreme Court in a dramatic protest a week after the inauguration of veteran leftist Luiz Inacio Lula da Silva as president.

The images were reminiscent of the January 6, 2021 invasion of the US Capitol building by supporters of former president Donald Trump, a Bolsonaro ally.

The crowd was finally dispersed by police, but their demands stayed behind in messages painted onto the facade -- including a call to the military for "Intervention now!"

Watch the No Comment by clicking on the player icon above.