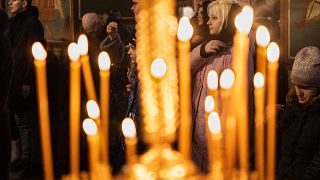 In the front-line town of Kostyantynivka in the Donetsk region, dozens of worshippers on Friday attended a service to mark Orthodox Christmas Eve.

In the front-line town of Kostyantynivka in the Donetsk region, dozens of worshippers on Friday attended a service to mark Orthodox Christmas Eve.

The service was held in the basement of the church, where the lower temple is located. All the windows around the church were protected with sandbags, due to its proximity to the front lines.

The service was held amid an uneasy calm after a Russian cease-fire declaration for Orthodox Christmas went into effect. Ukrainian and Western officials have scorned the truce as a ploy.

One of the attendees, who only gave his name as Volodymyr, said Kostyantynivka has been constantly under attack. "Therefore, we pray for peace, for an end to bloodshed," Volodymyr said.

Elsewhere, monks were preparing for Christmas in the Sviatohirsk Cave Monastery, also in the Donetsk region, which had come under fire from the beginning of the full-scale war, and was under Russian occupation for more than three months.

During this time, the monastery became a shelter for hundreds of people, especially those who lost their homes due to the fighting.

In the main temple of the monastery, which is under the Moscow Patriarchate, a Christmas tree and a nativity scene have been set up for Orthodox Christmas.

But holes in the walls and the graves of monks who died during the shelling of the monastery are a constant reminder of the fighting that took place in the spring and summer.