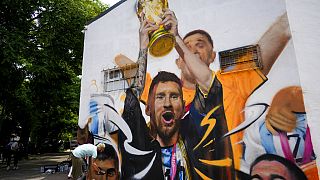 In the wake of Argentina's victory over France in the World Cup, Buenos Aires is paying tribute to the men who represented the country.

In the wake of Argentina's victory over France in the World Cup, Buenos Aires is paying tribute to the men who represented the country.

Wearing the traditional Qatari Bisht, Messi  stands in the center of the art piece, holding the trophy aloft.

Behind him is goalkeeper Emiliano 'Dibu' Martínez, who was the national hero during the penatly shootout which saw the Albiceleste win the title for the first time since 1986.

Bagnasco is also the creator of a monumental mural of another of Argentina's great footballing heroes, Diego Maradona, in a building located on the outskirts of Buenos Aires.

It was inaugurated on October 30, when the 1986 World Cup champion would have turned 62.