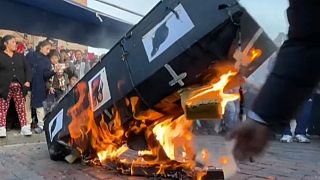 Peru's Congress on Tuesday voted to move up general elections from 2026 to April 2024 in a bid to ease tensions and head off deadly protests sparked by the ousting and arrest of president Pedro Castillo.

Peru's Congress on Tuesday voted to move up general elections from 2026 to April 2024 in a bid to ease tensions and head off deadly protests sparked by the ousting and arrest of president Pedro Castillo.

The political maelstrom has also touched off a diplomatic row with Mexico, which has voiced its support for Castillo, a leftist onetime schoolteacher.

Castillo was removed from office and detained earlier this month after seeking to dissolve Congress to rule by decree. His ousting was criticized by his leftist Latin American allies including Mexico and brought thousands of his supporters into the streets.

A subsequent security clampdown, including the deployment of armed soldiers during a state of emergency, declared under Boluarte, followed. Officials say at least 21 people have died in the unrest. More than 650 others have been injured.

Demonstrations rattled the country, with roadblocks and airport disruptions, and thousands of tourists were left stranded, including at the famed Inca citadel of Machu Picchu.