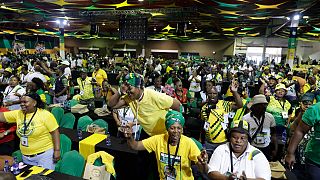 Watch: Thousands of delegates of the African National Congress to elect new leader

Members of the African National Congress (ANC), the ruling party in South Africa, arrived at their party conference to elect a new leader on Friday.

Members of the African National Congress (ANC), the ruling party in South Africa, arrived at their party conference to elect a new leader on Friday.

Cyril Ramaphosa, who has headed the party since 2018, is currently embroiled in a scandal following the release of a report alleging his involvement in a cover-up of a burglary on his farm. Despite this, the ANC looks set to re-elect Ramaphosa.

Meanwhile, some demonstrators from a break-away group gathered outside the conference, demanding greater support from the party.

Some 4,500 African National Congress (ANC) delegates from across the country are due to vote during the five-day convention at an events centre near Johannesburg.

But Ramaphosa's clean-hands image has been dented by allegations he concealed a huge cash burglary at his farm rather than report the matter to the authorities.

Despite this, analysts say the 70-year-old leader remains on track to win the party leadership election, expected to take place among delegates on Saturday.