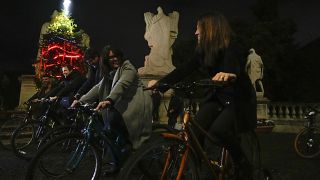 The six-metre tree, powered by six bicycles connected to a power generator, will light up Rome's city hall and its square until January 6.

City Council President and promoter of the event, Svetlana Celli, said the eco-friendly initiative is "symbolic but efficient" and "also a signal of peace and hope."

During the unveiling, Rome Mayor Roberto Gualtieri, President of the City Council Svetlana Celli, as well as several councillors and private citizens used bicycle power to light up the tree.

The initiative follows the inauguration of Rome's most important Christmas tree placed in the central Piazza Venezia, a 27-metre pine from northern Italy, powered by two solar panels.

The energy crisis is hitting the tradition of Christmas lights across Italy, and ‘carbon-free’ trees seem to be a winning model in this year’s Christmas.

In the mountain town of Borno, in Lombardy, cyclists on stationary bikes will provide power to the town’s Christmas tree by fueling batteries with kinetic energy. Anyone can hop on, and the faster they pedal, the brighter the lights. No holiday lighting will be put up elsewhere in town to raise awareness about energy conservation, officials said.