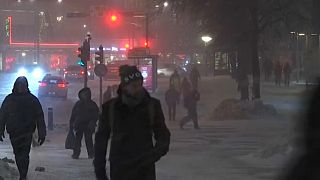 FinlandA winter storm has caused travel chaos in southern Finland. Bus and train routes in Helsinki have been cancelled or reduced and anyone catching a flight is facing delays on Tuesday.

A winter storm has caused travel chaos in southern Finland. Bus and train routes in Helsinki have been cancelled or reduced and anyone catching a flight is facing delays on Tuesday.

Power outages caused by the storm are also possible, with electricity companies across the southern Finland region saying they have made preparations for any disruption to energy supplies.

Temperatures reached minus 5 during the day on Tuesday and overnight will be around minus 9 degrees Celsius according to weather reports.

Lisbon City council issued a red alert in the early hours of Tuesday morning as a result of bad weather and urged residents to avoid leaving their homes.

Among the recommendations by the municipality was also an appeal to all those who didn't need to enter the city, not to, in order to mitigate possible problems.

André Fernandes, Civil Protection Commander, said "we appeal to people today to consider their movements and restrict them as much as possible."

The Civil Protection authority has reported more than 275 incidents. The intense rainfall caused authorities to shut down roads and city tunnels around the capital.