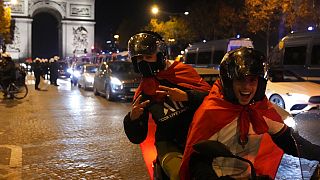 Only the most fervent Morocco fan would have bet on their side reaching the World Cup semi-finals before the tournament kicked off.

Only the most fervent Morocco fan would have bet on their side reaching the World Cup semi-finals before the tournament kicked off.

On Saturday, they beat Cristiano Ronaldo and Portugal 1-0 thanks to Youssef En-Nesyri's first-half header to go further than any African team ever has at a World Cup.

Morocco, ranked 22 in the world before the tournament started, have surpassed the three previous other African sides to reach the quarter-finals - Cameroon in 1990, Senegal in 2002 and Ghana in 2010.

The Moroccans have wildly surpassed expectations in Qatar and coach Walid Regragui lauded the battling spirit of his injury-hit side.

"We're drawing on all we have, we still have guys injured. I told the guys before the match we had to write history for Africa. I'm very, very happy," Regragui said.

As their national team made history, crowds gathered in Casablanca and chanted "Qualified! Qualified!"

There were also celebrations across the Arab world and in Europe after Morocco became the first Arab team to reach a World Cup semi-final.