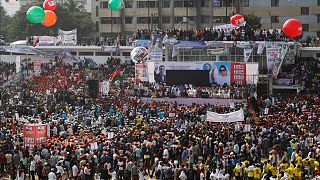 Tens of thousands of supporters of Bangladesh's main opposition party descended on Dhaka on Saturday to protest against the government of Prime Minister Sheikh Hasina and demand new elections.

Tens of thousands of supporters of Bangladesh's main opposition party descended on Dhaka on Saturday to protest against the government of Prime Minister Sheikh Hasina and demand new elections.

Tension was high in the capital after security forces stormed the headquarters of the opposition Bangladesh Nationalist Party (BNP) on Tuesday, leaving at least one person dead and scores injured.

Two of the party's top leaders were arrested on Friday over charges of inciting the violence, adding to the 2,000-odd activists and supporters the party said had been detained since 30 November to try to prevent the rally from going ahead.

The opposition has been holding protests around the country demanding Hasina resign and call an election under a caretaker government -- which she has rejected outright.

A BNP official claimed that around 200,000 people had joined Saturday's rally by mid-morning.