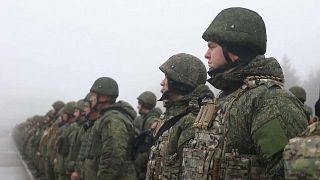 "The solemn event was attended by representatives of the training centre, clergy, veteran and military-patriotic organisations, and relatives of the mobilised. [...] Before departure, the servicemen were provided with clothes, combat equipment and weapons," said Russian authorities.

On 28 October, Russian Defense Minister Sergey Shoigu reported to President Vladimir Putin that a partial mobilisation campaign, which had kicked off on 21 September, was over.

According to Shoigu, 300,000 people were called up for the training.